advertisement
Home Climate Life in a Remote Alaskan Community on the Front Line of Climate... 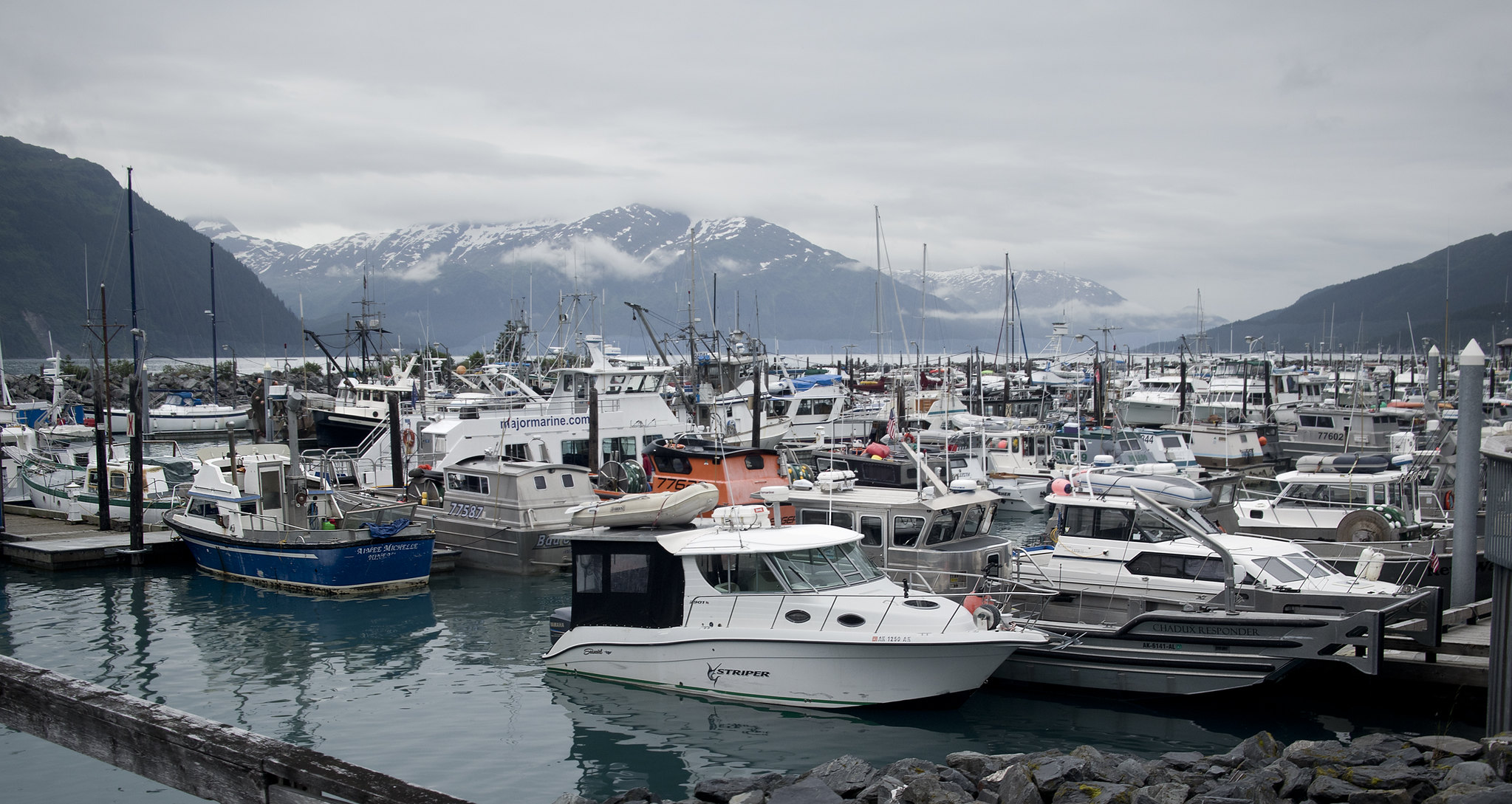 The world’s high-latitude regions experience climate change at a rate twice as fast as the rest of the world. Nowhere is this more evident than in the Prince Williams Sound in South Central Alaska. This shelter body of water off the North Pacific is home to some of the tallest coastal mountains in the world and dominated by glaciers and icefields. But with the extreme warming and drier than average summers the cryosphere here has undergone a massive transformation.

The fjords of Prince Williams Sound echo like thunder as glaciers calve off into the sea at an ever increasing rate. The ice loss from this region measures in the tens of billions of metric tons each year. For the roughly 200 year-round residents of Whittier, this loss amounts to far more than just a change in scenery.

Daily life in Whittier, now with COVID and climate challenges

Whittier is a small, understated community nestled between the icefields of the Chugach Mountains and the shores of Prince Williams Sound. At its surface, the town is not much more than a port, a small collection of tin-roofed restaurants and shops, and the 14 story concrete apartment building that houses nearly everyone in town. There are no chain stores or private homes. The only way in or out of town by land is through a single lane two-mile long tunnel open only periodically throughout the day. Given a complicated arrangement with the Alaska Railroad, which shares it, the tunnel closes each night at 10:30, or earlier in the winter months, essentially “trapping” residents in town until morning.

Despite this challenging geography, the small number of residents are proud to call this special place home. Walk through town on any given day and several locals can be seen sporting “POW” “Prisoner of Whittier” shirts, a symbol of town pride referencing the nightly tunnel closures.

Despite the small year-round population, Whittier residents still often get together. For instance, the Fourth of July is celebrated with a parade made up of local vehicles draped in banners and a fireworks show that, at least in local lore, has more rockets than the one held in Anchorage, the largest city in the state.

Whittier is a close-knit community, even by rural Alaskan standards, whose residents look after one another. This fidelity is on full display in the town’s Facebook group: “What’s What in Whittier”. Here community members help each other get supplies from Anchorage, report daily bear sightings in summer, share small town news, and, at least in pre-pandemic times, share items and baked goods, often for free.

When asked what she thought about living in Whittier, long-time resident Ashley Swain shared that she grew up in town and “would not have it another way”. Others like Oliviah Franke, who has worked for the US Forest Service in and around Whittier for several years, shared that “Whittier is magical … it is like its own world up in the mountains.”

But Oliviah has become increasingly worried about the future of the town, and she is not alone in that concern.
Like many other communities, Whittier has been dealing with the ongoing COVID-19 crisis and the resultant loss in tourist revenue from it. But by May 2020 city officials had another thing to worry about: A team of geologists had discovered that the town is at risk from a tsunami, driven not by seismic activity, but by climate change.

Concerns over ice loss for nearby Barry Glacier

Some 28 miles from the town of Whittier lies a glacier-filled fjord in Prince Williams Sound known as Barry Arm. The steep walls of this fjord rise nearly vertically out of the water some 2,000 feet high. The fjord is home to three glaciers: Cascade, Cox, and Barry, all of which have experienced rapid ice loss in recent decades.

The largest and fastest receding glacier in this fjord is the Barry Glacier. It’s losing billions of tons of ice each year resulting in a thinner shorter glacier. This has left large sections of the fjord walls exposed and vulnerable.

According to a statement released by the Alaska Division of Geological and Geophysical Surveys (DGGS) “As alpine permafrost thaws and glaciers thin and retreat, support of the valley walls is degraded and removed, allowing rockfalls and landslides to occur; landslides entering the water have the potential to create tsunami.”

With so many glaciers in retreat around Prince Williams Sound and elsewhere in the world, it is not surprising that the Barry Arm fjord is not the only one destabilizing. According to DGGS, many fjord walls across Alaska are becoming unstable as glaciers retreat. Some have already resulted in a tsunami.

Most recently, the destabilization of the Taan Fjord near Icy Bay in 2015 created a tsunami when a landslide was triggered by the retreat from the Tyndall Glacier. The tsunami was estimated to have reached a maximum height of 240 meters or nearly 790 feet according to authors of a 2018 study.

DGGS reports that the tsunami threat from Barry Arm has the potential to be even larger than the one generated in Taan Fjord. Fortunately as these tsunamis travel they lose force and height, but a tsunami reaching Whittier from Barry Arm likely will still be 30 to 40 feet in height.

Despite sensors placed on the fjord wall and in Whittier, DGGS and several other agencies have concluded that the best warning Whittier will receive most likely will be natural warning signs: unusual water movement as the wave approaches, or the sound of the water rushing into the Passage Canal Fjord where Whittier is located.

Whittier and the tsunami prospect

Being in a seismically active area, the threat of tsunami is nothing new to Whittier. Every Friday at noon, a tsunami alarm rings out as a test of the town’s early warning system, as has been the case since well before the discovery of the tsunami threat from Barry Arm.

Whittier was hit by a tsunami in 1964 after the historic Good Friday Earthquake, the largest on record for North America. According to the Whittier Historical Museum the tsunami killed 13 residents and destroyed the railyard, harbor, and several buildings. The large seven-story military barracks, known locally as the “Buckner Building,” was still sits ramshackled and windowless on a hill overlooking the harbor. Notably, the BTI, where most residents in Whittier currently live, was largely unharmed.

At that time, 57 years ago, Whittier was predominantly a military installation and rail yard. It is now a popular recreational sight for out-of-state tourists and Alaska residents alike.

The Whittier marina and small boat harbor are now filled with pleasure crafts for the Anchorage elite, commercial fishing vessels, and tour and charter boats. Large cruise ships routinely docked in Whittier during the summer month before COVID-19, and they have plans to return in 2022 once pandemic restrictions are lifted. Compared to 1964, there is a lot more infrastructure along the waterfront and, during the summer also many more people.

Mike Blansky, the Harbor Master for Whittier’s Cliffside Marina says he fears the projected tsunami from the Barry Arm landslide would be “catastrophic” for the marina and waterfront of Whittier. Asked if there is a way to mitigate the risk, he said any realistic attempt to do so would be futile, like trying to stop tsunamis that decimated communities of Japan’s northeast coast in 2011 killing nearly 18,000 people.

Despite the pending calamity, Blansky says, “We all live with the knowledge that catastrophes can and will happen, but we cannot let that dictate our lives.” This approach is pretty common around town. It’s perhaps comparable to the attitudes of many Californians aware of, yet somehow somewhat oblivious to, recurring earthquakes and “the next big one.”

Town officials, joined by scientists from the state and federal agencies have held town meetings to keep residents informed about the landslide, but the subject is not one often discussed outside of those meetings. For some, it seems a taboo topic: Asked about it, many locals say they aren’t paying close attention. Like much of the world, Whittier is far more concerned with the pandemic.

City officials have been grappling with the unique challenge of having a population in such close quarters yet so far from a health facility. Residents, aware of their increased risk given their geography, seem especially focused on staying safe. Business owners scramble to make up lost revenue from losses of tourism brought on by the pandemic. Not fearing the tsunami so much, Blansky does worry about people avoiding Whittier, leading to further economic strain.

The town’s focus seems somewhat justified. Aside from putting up sensors, which it has already done, there seems little it can do now to prevent the disaster from occurring.

Whittier, the ‘canary in the cave’ on the First Frontier

Alaska is known to many as the “Last Frontier,” but what is happening in Whittier, on the first frontier of the state’s climate change concerns, is not unique to this town. The same climate forces that are contributing to the crisis in Whittier are part of the global system that has already affected communities like Paradise, California, and parts of eastern Australia, both destroyed by climate-driven wildfires in recent years.

Climate change also affects weather patterns. What is happening in Whittier is, then, also not so different from the climate-driven extreme weather events like the unprecedented hurricanes that destroyed parts of Puerto Rico and Texas in past years. The very glaciers that are melting in Barry Arm and elsewhere in Prince Williams Sound are the same ones that contribute to sea-level rise threatening communities like Miami, Norfolk, Boston, and Venice.

While it is hard to pinpoint a single extreme weather event or wildfire as being directly caused by climate change, it is clear that changes in climate patterns are enabling these types of events to occur more frequently and or more severely.

Whittier shows us that climate change poses an unequivocal threat to human life and livelihood, not in some distant future, but here and now.

The events are already in motion for Whittier, there will come a day, perhaps soon, when Whittier looks vastly different. Whittier needed aggressive international climate action to be taken some 30 years ago, but there is no time to dwell on what could have been. However, it is never too late to start doing the right thing.

By embracing bold climate action now and being mindful of our own carbon footprints, we can start to build a stronger and safer future for ourselves and for our communities. What other choice do we have?