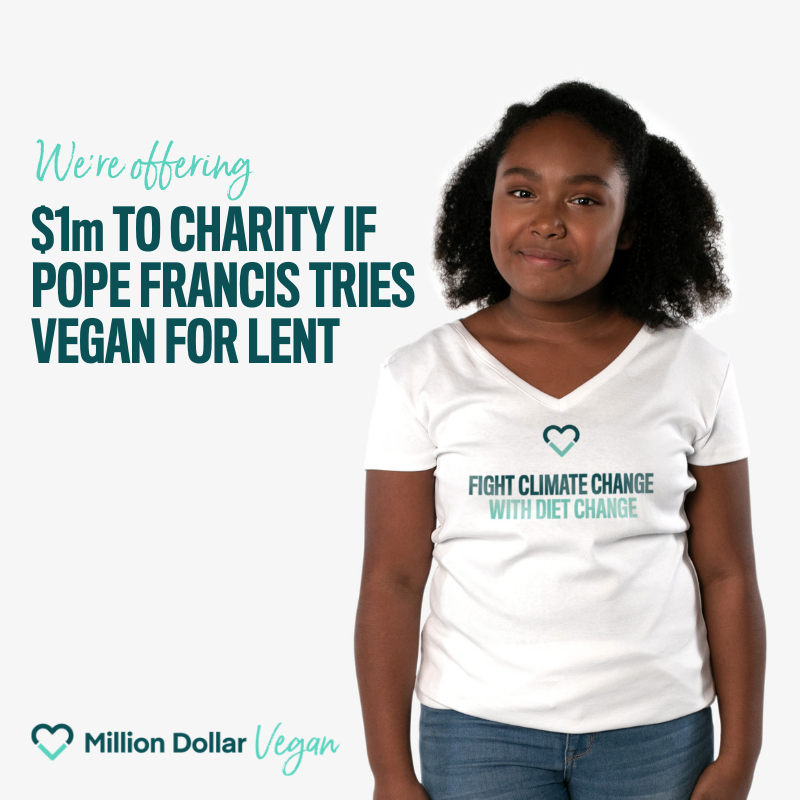 A global campaign calls on Pope Francis to “help fight climate change with diet change” by going vegan for Lent. In exchange for his pledge, Million Dollar Vegan is offering $1 million to a charity of his choice.

The goal of the campaign is to highlight the impact of animal agriculture.

Livestock farming is one of the leading causes of climate change. The Food and Agricultural Organization of the United Nations reports that the total emissions of global livestock farming are 7.1 Gigatonnes of CO2, representing 14.5% of all human-produced greenhouse gas emissions.

The process is very resource-intensive. Producing 1kg of beef requires 25kg of grain and approximately 15,000 liters of water.  According to the United Nations Environment Programme (UNEP), the calories lost by feeding the cereals to animals versus using them as human food could feed an additional 3.5 billion people.

A recent study shows that beef consumption in the average American diet creates nearly 1,984lbs of CO2. Swapping out plants for beef would reduce that figure by 96%, resulting in 73lbs of CO2.

Genesis Butler, a 12-year-old environmental activist, wrote a letter to Pope Francis urging him to eat a plant-based diet during Lent. In the letter, Butler discusses the effects of livestock farming, connecting it to climate change, world hunger, disease, and wildlife extinction.

“Farming and slaughtering animals causes a lot of suffering and is also a leading cause of climate change, deforestation, and species loss,” Butler wrote in the letter. “When we feed animals crops that humans can eat, it is wasteful. And with a growing world population, we cannot afford to be wasteful.”

Million Dollar Vegan is supported by celebrities, environmentalists, and scientists around the world. Among their supporters are Paul McCartney, Woody Harrelson, and Evanna Lynch.