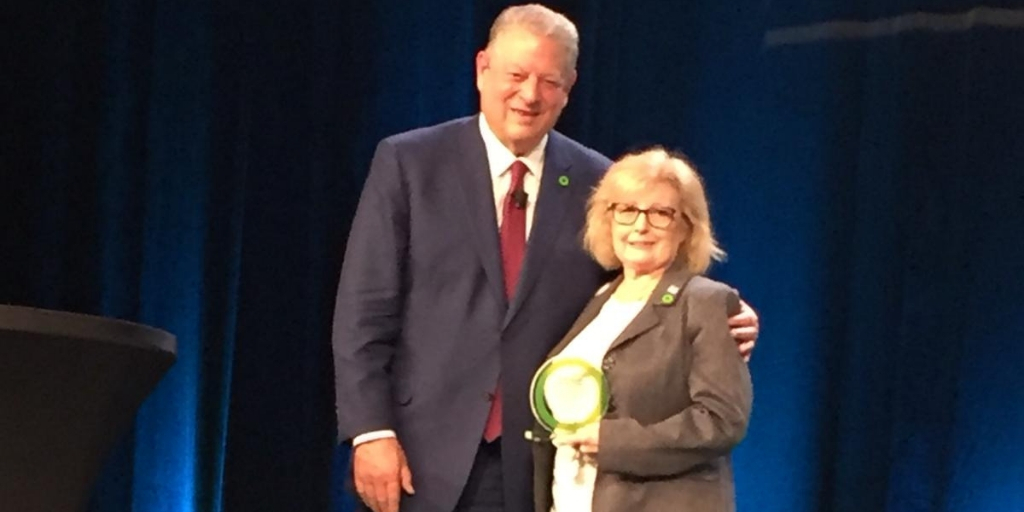 Bringing together everyone from middle-schoolers to business executives to celebrities, the Climate Reality Project works to catalyze global solutions to the climate crisis by making urgent action a necessity across every level of society.

The Green Ring Award is presented to trained Climate Reality Leaders who have demonstrated extraordinary commitment to their role as climate communicators and activists.

“Laura is a true example of what it means to be a Climate Reality Leader,” said Gore.“Through her work with Climate Reality’s Central Florida Chapter, she has worked tirelessly to advance climate action and social justice, paying special attention to the climate crisis’s disproportionate impact on our most vulnerable communities. I was honored to present Laura with the Green Ring Award in Atlanta and look forward to hearing about the incredible work she continues to do in the future.”

As a Florida resident, Betts has seen firsthand how frontline communities have been affected by the climate crisis. In 2017, 250,000 refugees came to Florida in the aftermath of Hurricane Maria.

Following the devastation caused by the hurricane, Betts personally made soup for more than 200 victims- many of whom were refugees.

As Founder and Co-Chair of the Climate Reality Project’s Central Florida Chapter, Betts leads chapter members in building public support for climate solutions at the local, regional, and national level.

Recently, the Chapter aided in the implementation of the City of Orlando’s Green Works Plan.

“I’m thrilled to be recognized by Vice President Al Gore with Climate Reality’s Green Ring Award,” said Betts. “Climate action is the path forward for building just, inclusive, and sustainable communities, and I am honored to work with The Climate Reality Project, our chapter members in Central Florida, and supporters from around the country to create a better future for ourselves and future generations.”

The conference in Atlanta marked the Climate Reality Leadership Corps 40th training since its inception in 2006.