Before the concrete and container ships, when canoes were more common than cars, the New York Harbor was a pristine biodiverse estuary. Once one of the most productive ecosystems in the world, it overflowed with underground freshwater springs, swamps, bogs, and lush hemlock forest. It teemed with black bears, bobcats, white-tailed deer, and red squirrels as well as many other unique plants and animals.

The harbor was also home for copious amounts of oysters. During the 1700s, New York Harbor was flourishing with oyster beds, a popular treat for the Lenape tribe. As more settlers came and the city grew, so did their consumption. Within about 200 years, they have all but been wiped out.

Restoring life into a degraded ecosystem of this size is no small endeavor. That’s where the oysters come in. Oysters purify water by removing pollutants, sediments, and nitrogen from seawater as it sifts for food. One adult oyster can purify 50 gallons of water per day, and a one-acre oyster reef can purify an astonishing 24 million gallons of water daily.

Not only do oysters filter and clarify water but similar to coral reefs they provide vital habitats and shelter for hundreds of species. Oyster reefs also offer storm protection by reducing the impact of large waves, reducing flooding and helping to shield shorelines from erosion.

As its name suggests, the Billion Oyster Project (BOP) has set out to restore one billion oysters to the harbor through public education initiatives.

Since launching in 2014, the Billion Oyster Project has been flooded with community support. BOP has more than 9,000 volunteers helping with the restoration work. In addition, they also have more than 6,000 students from the harbor area monitoring the oyster and harbor health as part of their STEM education.

With the help of local restaurants, over one million pounds of oyster shell has been diverted from landfills and returned to the harbor to create new oyster reefs.

The Billion Oyster Project has planted over 28,000,000 oysters on 12 oyster reefs covering 7 acres. Their goal is to restore 100 acres of reef by 2035. A billion bivalves, now that’s a lot of purifying power.

Oyster reefs are the most imperiled marine habitat on the earth with 85% lost in the last 200 years. With conservation and restoration initiatives like the Billion Oyster Project, New York Harbor may once again be home to seahorses, seals, and whales! 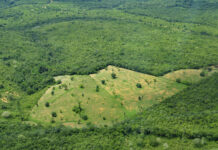 This Initiative is Paying Farmers and Ranchers to Combat Amazon Deforestation