Pink Floyd guitarist and vocalist David Gilmour has lent his voice and his guitar collection to raising awareness of the climate crisis. On June 20th, Gilmour auctioned off his guitar collection in New York City. The auction, held by Christie’s, earned more than $21 million, beating the previous record held by Eric Clapton.

All proceeds from the auction were donated to ClientEarth.

“The global climate crisis is the greatest challenge that humanity will ever face, and we are within a few years of the effects of global warming being irreversible. As Greta Thunberg, the 16-year-old Swedish climate activist said in a speech earlier this year ‘Either we choose to go on as a civilisation, or we don’t.’ The choice really is that simple, and I hope that the sale of these guitars will help ClientEarth in their cause to use the law to bring about real change. We need a civilised world that goes on for all our grandchildren and beyond in which these guitars can be played and songs can be sung,” said Gilmour.

Founded in 2008, ClientEarth uses the law to bring about fundamental changes to combat climate change, protect nature, and secure people’s environmental rights. The charity is staffed with more than 150 lawyers and environmental experts from around the globe that have worked towards preventing primeval forest destruction, stopped dozens of coal plants from opening throughout Europe, and support indigenous communities affected by climate change.

“This is a truly humbling and extraordinary gift, which goes beyond our wildest expectations. It’s difficult to express just how deeply grateful we are to David for choosing ClientEarth as the beneficiary of this historic auction. The law is one of the most powerful tools we have to tackle the world’s increasing environmental problems. This gift is a phenomenal boost to our work using the law to tackle climate change and protect nature. It will allow us to play an even greater role in addressing the climate crisis and securing a healthy planet for future generations,” said James Thornton, CEO of ClientEarth.

Prior to the auction, fans had the opportunity to book hour-long slots at tour stops in London, Los Angeles, and New York to get a close look at the guitars; more than 12,000 signed up.

In total, Gilmour auctioned off 126 guitars, including his iconic 1969 black Fender Stratocaster or ‘Black Strat.’

The ‘Black Strat’ was Gilmour’s primary instrument for recording and performances and was featured in many of Pink Floyd’s albums such as The Wall and Dark Side of the Moon. The ‘Black Strat’ brought in an astounding $3,975,000.

“This sale truly exceeded all our hopes and expectations. Christie’s opened its doors this morning to over 900 people who came to bid and watch the sale. We are delighted that David Gilmour has decided to donate all sale proceeds to charitable causes and would like to thank everyone for their very generous bids,” said Julia Delves Broughton, Christie’s Chairman.

Overall, the auction had more than 2,000 bidders from 55 countries.

Over 2,000 Scientists and Academics Call for World Leaders to Negotiate a Treaty to Phase Out Fossil Fuels 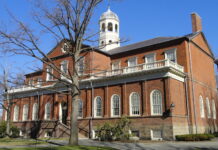 Harvard Moves to Divest from All Fossil Fuels

Over 2,000 Scientists and Academics Call for World Leaders to Negotiate a Treaty to...

Climate The Planetary Press - September 16, 2021
Written by: Kimberly White  Scientists and academics across the globe have joined together in a call to phase out...

Packaging Generates A Lot of Waste – Now Maine and Oregon Want Manufacturers to...

World The Planetary Press - September 15, 2021
Written by: Jessica Heiges and Kate O'Neill Most consumers don’t pay much attention to...