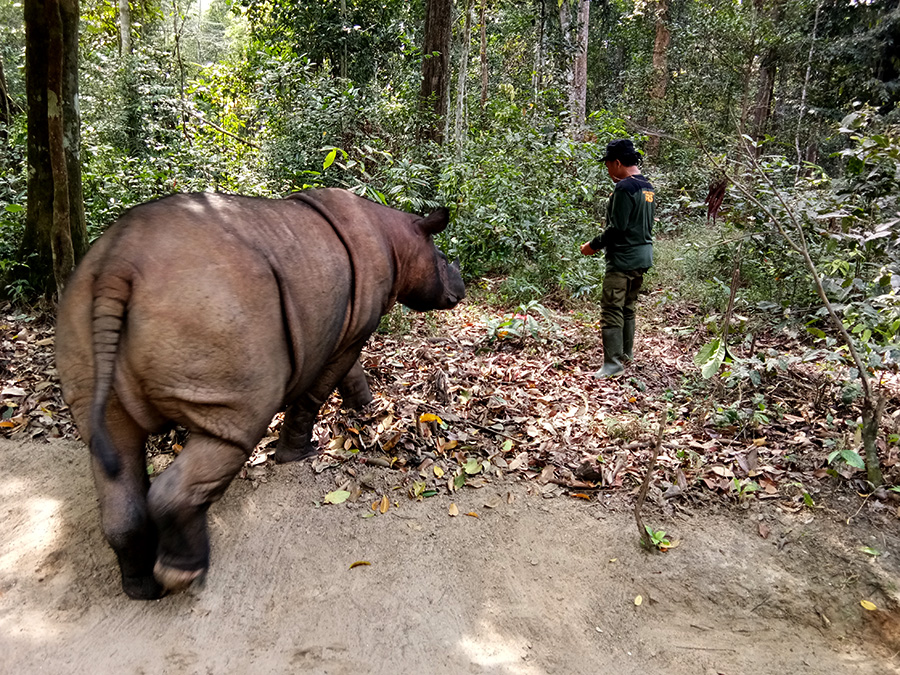 As Indonesia prepares to launch a new captive-breeding facility for Sumatran rhinos (Dicerorhinus sumatrensis) in the northern province of Aceh, authorities and conservationists are intensifying efforts to survey and protect the province’s remaining wild rhinos.

Authorities say they believe that the Leuser Ecosystem, which spans 2.6 million hectares (6.4 million acres) in Aceh and North Sumatra provinces, could be home to as many as 50 Sumatran rhinos. No more than 80 Sumatran rhinos are estimated to survive in the wild, scattered in small populations across Sumatra and Borneo.

In Aceh, conservation groups are working with government agencies including the Mount Leuser National Park Center, the Aceh Natural Resources Conservation Agency, the Aceh Environmental and Forestry Service and the Forest Management Unit (KPH) to mobilize 26 patrol teams to monitor the rhino population in the Leuser Ecosystem.

“The team goes around every month,” said Dedi Yansyah, wildlife protection coordinator for the Leuser Conservation Forum, one of the NGOs working to mobilize patrols.

They found that the Leuser rhino population is dispersed into small groups living in isolation from each other, which could further endanger their survival and breeding.

“In some places in Leuser, there is no indication of rhino presence. This could be due to the absence of male or female rhinos, or because of diseases that prevent them from breeding,” Dedi said.

He added that the Leuser ecosystem is an ideal natural habitat for the Sumatran rhino, “as long as it’s safe from hunting and the habitat isn’t damaged.” Both factors currently threaten the Leuser’s rhinos. Sumatran rhino horns have been found on the black market in northern Sumatra in recent years, and rhinos are also at risk of injury from snares set for other animals. Forest clearing also remains a major issue in the ecosystem, particularly for palm oil and other types of agriculture.

Authorities and conservation groups have been working to monitor isolated rhinos with the aim of eventually integrating the animals into a planned sanctuary in Aceh where they can take part in a captive-breeding program.

While poaching and habitat fragmentation have driven the species to the brink of extinction, the greatest threat currently facing the species is a low birth rate. With many of the surviving individuals isolated from other members of their species, experts fear that the population will dwindle as rhinos die of natural causes without ever reproducing.

As a result, conservation efforts are currently focused on bringing isolated rhinos together to breed. Seven rhinos are currently cared for at the Sumatran Rhino Sanctuary (SRS) in Sumatra’s Way Kambas National Park, including two calves bred and born at the sanctuary. A recently captured female is held at a newly established SRS in Indonesian Borneo, and plans are underway to establish a third SRS somewhere in the Leuser Ecosystem.

“The Sumatran Rhino Sanctuary in Aceh is in the process of permission and location determination,” Dedi said. “The target is to operate in 2021. The individual rhinos will be placed in the SRS, and their offspring will be released into the wild — of course with consideration that the individual is ready and its habitat is safe.”

The team has identified 14 suitable potential sites, and is awaiting approval from the environment ministry before making a final selection.

In 2018, the Minister of Environment and Forestry released a directive to unite the Sumatran rhino populations from the Leuser Ecosystem Area and the Mount Leuser National Park into one habitat of more than 100,000 hectares (247,000 acres).

The rhino action plan calls for sub-populations with at least 10 to 15 individuals, and therefore large enough to breed on their own, to be protected in place, said Sapto Aji Prabowo, head of the Aceh Natural Resources Conservation Agency

“According to expert opinion, the fragmented rhino populations must be collected in one place so that they can breed. The Ministry of Environment and Forestry, through the Directorate General of Nature Resources and Ecosystem Conservation, has decided that,” Sapto said.

“The integration of small populations is important to help with breeding, so that when the offspring are born they can be returned to their natural habitat,” he said. “An SRS in Aceh is important because based on research there are pockets that are not able to breed, so the population is very small. But building an SRS must also be done very carefully and must be supported by all parties, starting from the site level to the central government.”

The plan now has the support of the local government. The head of East Aceh district, Hasballah M. Thaib, said he hopes the SRS will soon be realized.

“East Aceh district is willing to provide a place for SRS development. We want the presence of the SRS to not only have an impact on rhino rescue but also increase public awareness and all parties to protect the forest and all its inhabitants,” he said.

Header Image Caption & Credit: A Sumatran rhino with a caretaker in the Way Kambas SRS. Image by Rahmadi Rahmad/Mongabay Indonesia. 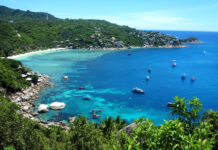 Crowdfunding for Conservation on a Deserted Tourist Island