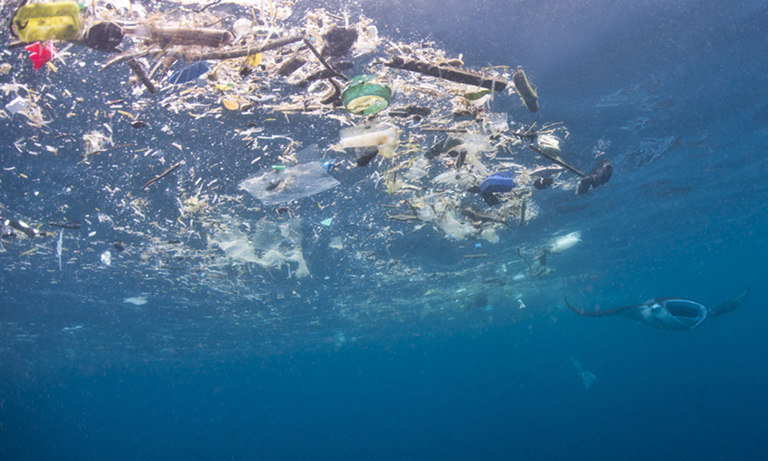 New research finds that large filter feeders in the waters of Indonesia could be ingesting dozens to hundreds of microplastic particles every hour.

Due to their filter feeding strategy, manta rays and whale sharks must swallow hundreds to thousands of cubic meters of sea water every day in order to catch enough zooplankton, microscopic organisms that float passively in the water and are an important source of food for the filter feeders. That means that manta rays and whale sharks are also at risk of accidentally ingesting tiny pieces of plastic known as microplastics (which are typically said to be less than 5 millimeters in length), the result of plastic bags, single-use packaging, and other plastic waste making its way into the ocean and breaking down over time.

Indonesia currently ranks as the world’s second largest plastic marine debris emitter, according to the study’s authors. Ingestion of plastic pollution can have severe impacts on marine wildlife, they note: “In addition to the more obvious issues associated with the ingestion of foreign, potentially indigestible objects — such as digestive tract obstruction and perforation, dietary dilution and starvation — plastics, are significant carriers of toxic additives such as bisphenol A, phthalates, and flame retardants.” Given the long lifespans of manta rays and whale sharks, these species have plenty of time to accumulate plastic pollution in their bodies over the course of their lives.

Because both species spend much of their time feeding in surface waters close to shore, which is precisely where trash usually accumulates, the researchers, a team of marine biologists with the Marine Megafauna Foundation, Australia’s Murdoch University, and Indonesia’s Udayana University, trawled for plastics in the top 50 centimeters of the water column. After estimating the amount of microplastic particles present in the waters of their three study areas, the researchers were then able to determine how much of that plastic might find its way into the digestive tracts of reef manta rays and whale sharks. They found that reef manta rays may eat up to 63 pieces of plastic per hour when feeding in Nusa Penida and Komodo National Park, while whale sharks could be consuming up to 137 pieces per hour during seasonal aggregations in Java.

The study’s lead author, Elitza Germanov, is a researcher at the Marine Megafauna Foundation and PhD candidate at Murdoch University. She said that both filter feeding species don’t even need to consume microplastics to be affected by them: “Manta rays and whale sharks can ingest microplastics directly from polluted water or indirectly through the contaminated plankton they feed on.”

Study co-author Neil Loneragan, a professor at Murdoch University, said that it is difficult to assess exactly how many plastic particles are actually ingested by manta rays and whale sharks because conventional methods of studying animal diets, like stomach analysis, aren’t feasible for threatened species like these. Reef manta rays are listed as Vulnerable on the IUCN Red List. Whale sharks are listed as Endangered.

The research team did collect 22 samples of manta ray feces and vomit, however, which tested positive for plastics. That means that plastics are being ingested by the filter feeders, which are thus likely being exposed to toxic chemicals and pollutants while the plastics are in their digestive systems.

“We now know that, through exposure to toxic substances, plastic contamination has the potential to further reduce the population numbers of these threatened animals because they reproduce slowly and have few offspring throughout their lives,” Germanov added.

The main threats to both reef manta rays and whale sharks is overfishing. They are also a common incidental catch and frequently become entangled in fishing gear. The impacts of microplastic ingestion are only likely to compound these threats, the researchers said. Luckily, they discovered that the amount of plastic pollution present in their study areas was seasonal, which points to means of mitigating the problem.

The study found that plastic abundance in Indonesia’s waters can be as much as 44 times higher during the rainy season than the rest of the year. Study co-author I. Gede Hedrawan, an Indonesian plastics researcher at Udayana University, said that “The seasonal variability in plastic pollution shows what a difference it would make to clean up river beds before the rainy season begins.” He suggested that local authorities could also prohibit waste disposal in areas where the waste might be able to make its way into the ocean.

Hedrawan applauded Bali for recently banning single-use plastics, an example other governments could follow, though he said the law “is yet to reach its full effect and spread to smaller businesses.”

The researchers argue that such measures are warranted given the results of their study, which can also help regulators in convincing the public that banning plastic bags and other single-use plastics is a necessary course of action.

“The urgency to reduce marine plastic pollution has become a prominent environmental issue, and many countries are joining global initiatives (e.g., Clean Seas Campaign, 2019) to reduce plastic waste and marine pollution,” the researchers write. “Incorporating the information gleaned from this study into educational campaigns that bring awareness about the potential impacts of plastic marine debris to flagship species, like manta rays, whale sharks and other charismatic megafauna, might assist local governments as they attempt to socialize increasing regulations on plastic usage and disposal.”