advertisement
Home Environment Greenpeace and the Creators of Wallace and Gromit Team Up to Highlight... 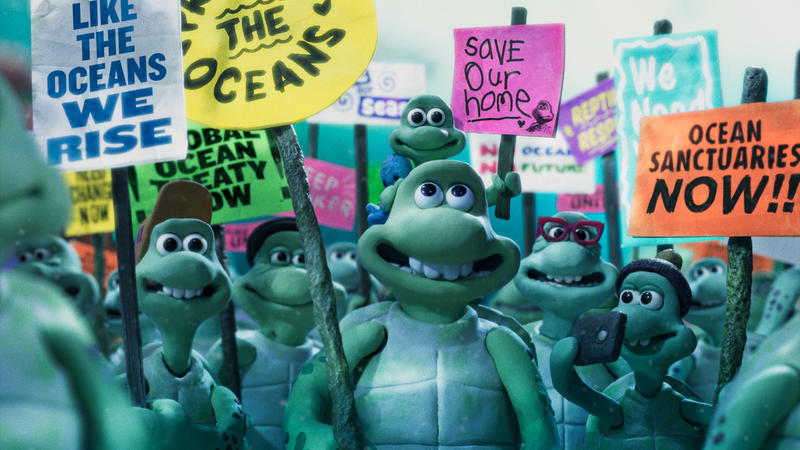 Greenpeace UK has teamed up with the creators of Wallace and Gromit to shed some light on the threats the world’s oceans are facing.

Award-winning studio Aardman created Turtle Journey, a short film sharing the story of a turtle family who is trying to go home. Along the way, the family is bombarded with threats from plastic pollution, oil drilling, climate change, and overfishing.

Global warming is exceeding wildlife’s natural abilities to adapt to dramatic environmental changes. All seven species of sea turtles are at risk from the current and potential impacts of the climate crisis.

As temperatures rise, scientists are seeing drastic changes in sea turtle sex ratios. In Australia, a study of green sea turtle nesting grounds found that females outnumbered males 116 to 1. As temperatures continue to rise, not only will the ratios become more imbalanced, but the eggs can cook in their nests or heat-stressed hatchlings can die once they reach the water.

Hatchlings also need to contend with plastic pollution. Scientists estimate that more than fifty percent of sea turtles have consumed plastic debris. Plastic ingestion can cause a range of problems, including intestinal blockages and starvation. Sea turtles may not eat with plastic in their stomachs due to feeling full, leading to emaciation and eventually death.

As mentioned in the short film, oil drilling and spills pose a significant risk to sea turtles and other marine life. Nearly five million barrels of oil were spilled in the Gulf of Mexico due to the Deepwater Horizon oil drilling platform exploding in 2010. According to NOAA, more than 150 dolphins and 600 sea turtles were found dead. Approximately 450 oiled sea turtles were able to be rehabilitated and released back into the wild.

The stop-motion film showcased the harsh reality many sea turtles face with the fate of the turtle family’s mother, voiced by Olivia Colman. Greenpeace reports that an estimated eight million sea turtles were caught as bycatch between 1998 and 2008.

“Home is the most important thing we have. A safe space for us and our family to live. But we’re taking that away from turtles, whales, penguins and so many other incredible animals. Most of us instinctively love the oceans and care about the amazing marine life that lives there, but far fewer people know how much pressure they are under. If we don’t act now we risk causing irreversible harm to our oceans and losing species for good,” said Olivia Colman, Oscar-winning actor and voice of the turtle family’s mother.

Oceans play a crucial role in regulating climate. Oceans absorb approximately thirty percent of anthropogenic carbon dioxide. Without the oceans acting as a carbon sink, the concentration of carbon dioxide in the atmosphere would be much higher and the impacts would be devastating.

Through the short film, Greenpeace and Aardman aim to showcase the importance of ocean protection and inspire civil society to call on their governments to support a strong Global Ocean Treaty.

“Governments have a chance to turn rhetoric and empty words into action at the United Nations this year when they meet to agree on a new Global Ocean Treaty. A strong treaty would provide a framework for the fully protected marine sanctuaries our oceans need,” said Will McCallum, Head of Oceans at Greenpeace UK. “A weak treaty will maintain the status quo: a broken, fragmented system of ocean governance that’s already caused untold harm to our oceans. History will judge our governments for their actions this year – they must protect our oceans.”