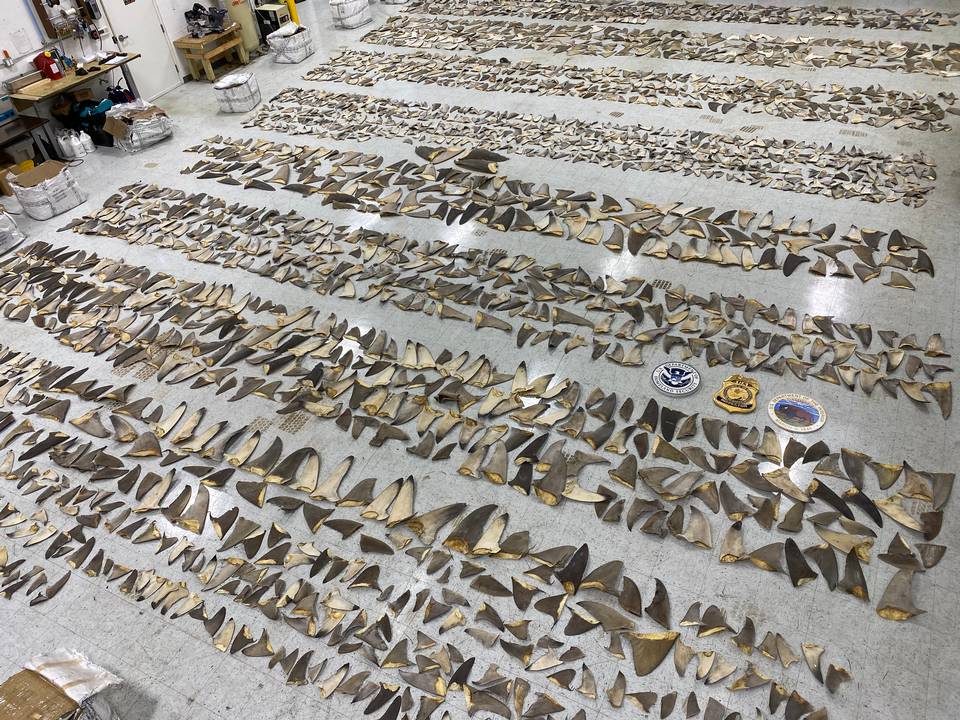 Officials estimate that the shipment of fins has a commercial value of nearly $1 million. The shipment is believed to have originated from South America and was destined for Asia, reported CNN.

It is unclear whether arrests have been made or charges filed. The U.S. Fish and Wildlife Service Chief of Public Affairs, Gavin Shire, stated that officials are limited on what they can say at the moment as the seizure is an ongoing case.

Shark finning is a global problem. Once caught, a shark’s fin is hacked off while it is still alive. Once the fin is obtained, the shark is then tossed back into the ocean to die from suffocation, blood loss, or predation.

While shark finning has been prohibited in the United States since 2000, it is still legal to buy and sell shark fins in most of the U.S. Currently, only twelve states ban the sale of shark fins.

The U.S. House of Representatives passed the Shark Fin Sales Elimination Act (H.R. 737) to ban the sale and trade of shark fins in the United States last year. The proposed bill now awaits approval from the Senate.

Annually, humans kill more than 100 million sharks. Out of those 100 million, 73 million are killed for shark fin soup.

“It’s without doubt, the worst act of animal cruelty I’ve ever seen,” said Gordon Ramsay, celebrity chef. Ramsay set out to expose the industry and raise awareness of shark finning in his 2011 television documentary, SHARKBAIT.

Often served at weddings and special events, shark fin soup is considered a delicacy and a symbol of prestige throughout Asia. However, shark fins have no nutritional value or flavor, are not an aphrodisiac, and can be dangerous to consume.

A study from the University of Miami found that the fins and meat from ten species of sharks contain high levels of mercury and BMAA.

“Recent studies have linked BMAA to neurodegenerative diseases such as Alzheimer’s disease and amyotrophic lateral sclerosis (ALS),” said Deborah Mash, Professor of Neurology and senior author of the study. “Our results suggest that humans who consume shark parts may be at a risk for developing neurological diseases.”

Hong Kong, Malaysia, China, and Singapore are the largest importers of shark fins.

WildAid, a non-profit organization working to end the illegal wildlife trade, has been successfully raising awareness about trafficked animals around the world and catalyzing change in consumer behaviors. WildAid conducted a series of campaigns aiming to reduce shark fin consumption in China. A 2016 survey of Chinese residents found that ninety-three percent of respondents had not consumed shark fin in the previous six years- approximately eighty percent of those surveyed had seen the campaign messages. China has seen an eighty percent decrease in shark fin consumption.

Scientists estimate that nearly sixty percent of sharks are threatened by overexploitation, with seventy shark species at risk of extinction. Sharks are apex predators and play a critical role in maintaining a healthy ocean ecosystem.

The current rate of shark population decimation is unsustainable. Sharks reproduce slowly and take time to mature. Shark pregnancies average between nine to twelve months, and some species do not reproduce every year. Many are killed before they have had a chance to reproduce.

A collapse of shark populations could cause dramatic shifts in the marine environment that would be felt throughout the entire system, leading to a collapse of important fisheries, affecting human access to seafood.

“It is absolutely immoral to kill sharks and other wildlife with these terrible fishing practices. We are exposing the culprits at sea now, but we urgently need a strong treaty and tighter fishing limits to protect our global oceans,” said Will McCallum, Head of Greenpeace’s Protect the Oceans campaign, following a confrontation with a Spanish fishing vessel.