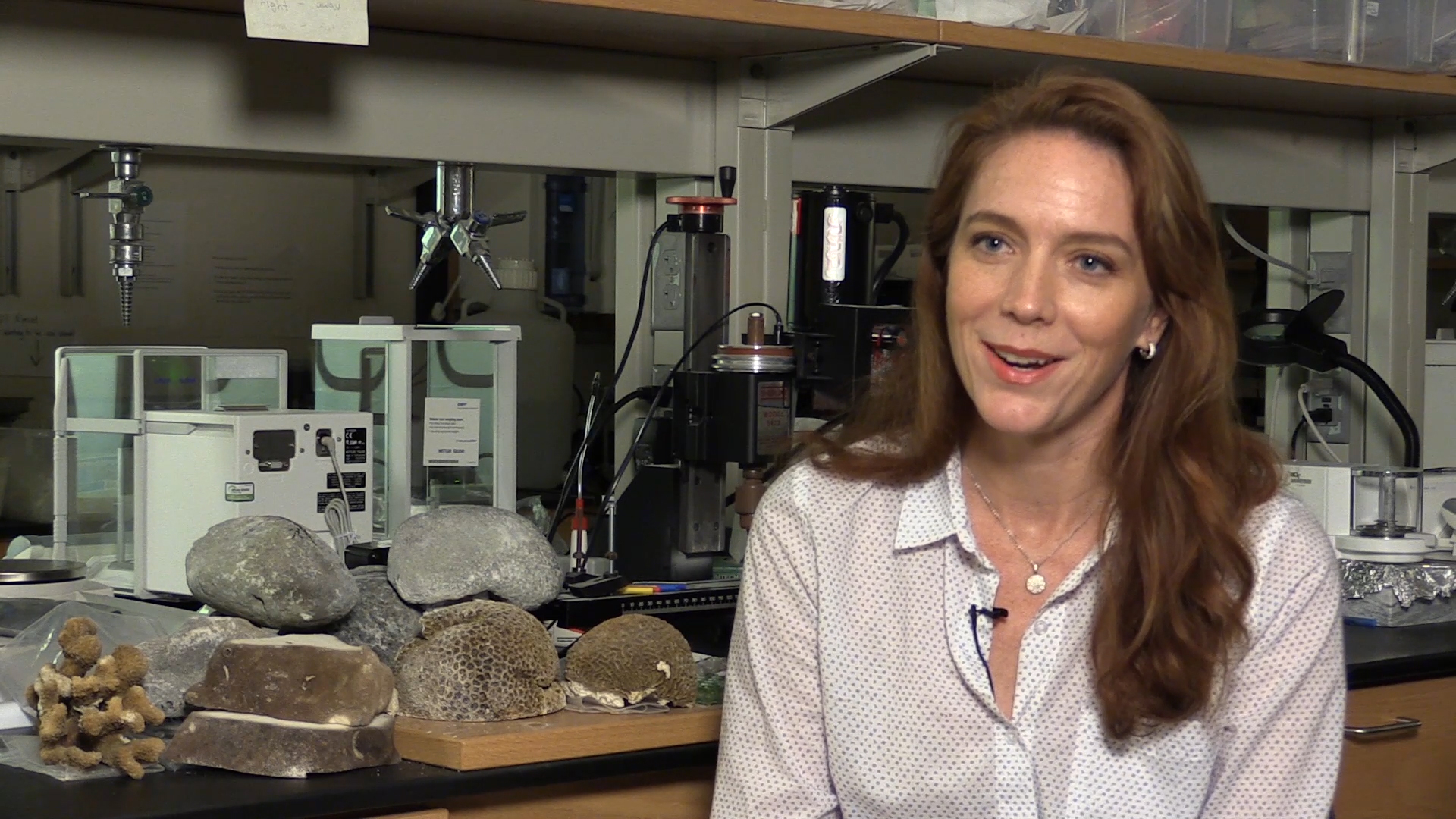 Dr. Kim Cobb is an award-winning climate scientist at Georgia Tech and a lead author of the next Intergovernmental Panel on Climate Change report. However, over the past several years, the very climate changes she has researched have conspired to change the course of her career.

2016 was the turning point. That year, global warming combined with a monster El Niño event to shatter the previous record for Earth’s hottest year and devastate the coral reefs she had studied for nearly two decades. In 2017 and 2018, flooding events along the Georgia coast brought the impacts of climate change even closer to home.

“I decided to go ‘all in’ on climate solutions, personally and professionally,” Dr. Cobb said in a phone interview from her home office. She began changing her lifestyle to lower her personal carbon footprint, slashing her flights to scientific conferences despite that decision’s professional costs, and shifting her focus in the direction of climate solutions.

Cobb and her colleagues had been studying coral reefs in the Northern Line Islands – located in the middle of the Pacific Ocean, about 1,200 miles south of Hawaii – since 1997. By examining the oxygen isotopes in the calcium carbonate of their coral samples, the team was able to create a valuable reconstruction of ocean temperatures in the region going back as far as 7,000 years.

Coral reefs, among the most diverse ecosystems in the world, are highly vulnerable to the one-two punch of heatwaves and ocean acidification that result from rising carbon dioxide levels due to humans burning fossil fuels. El Niño events warm sea surface temperatures by disrupting the mixing of cooler waters from below, and the El Niño of 2015-2016 was the strongest such event since, coincidentally, that of 1997-1998, when Cobb first began her regular treks to the Line Islands.

The main difference between the two events? Global warming continued to raise baseline temperatures during the intermediate two decades. As a result, in the central Pacific, the marine heatwave of 1997-1998 was not as strong or long-lasting as that in 2015-2016. The corals at her research site were minimally impacted by the former, but the latter was a much different story.

“Most of the reef was obliterated in 2016, with up to 90% mortality,” Cobb explained. “Nothing prepared me for those dives. The feeling of loss was worse because it was an avoidable loss. As scientists, we’ve been warning about this for decades. For me, it was a bellwether event.”

While some of the Line Island corals have begun to rebound since 2016, a full recovery of coral size and diversity would take over 50 years under good conditions. Climate change, however, will continue to stress the coral reefs. In fact, they experienced mild bleaching stress again in 2019 despite the lack of an El Niño event last year.

In October 2019, Cobb and her colleagues published a paper that used their Line Islands coral record to show that climate change appears to have intensified El Niño events over the past 50 years as compared to the prior 7,000 years. Cobb’s corals were able to tell the story of their own demise.

In 2017, Hurricane Irma caused widespread damage in Georgia, including flooding the home of Dr. Russell Clark, a research scientist in Georgia Tech’s School of Computer Science. On Thanksgiving Day in 2018, Clark found his neighborhood unexpectedly inundated again – this time on a sunny day. Such “sunny day flooding events” can occur when strong winds in the right direction coincide with high tide, which will happen more frequently as sea levels continue to rise due to global warming. A few months later, his path intersected with Cobb’s.

“I met Kim Cobb at an organizational meeting for the Georgia Smart Communities Challenge,” said Clark. “In retrospect, the timing was perfect for both of us to turn our passion for the importance of addressing climate change into a new research initiative.”

Cobb in early 2018 became inaugural director of the Georgia Tech Global Change Program. That effort trains a new generation of leaders to pursue climate solutions, and it was looking to build cross-campus collaborations. Her expertise in oceanography and climate change, combined with Clark’s expertise in sensors and information technology, presented an opportunity to address the data gap that had led to Clark’s lack of advance warning on that soggy Thanksgiving Day.

After obtaining a starter grant and meeting with local government agencies, their new team was able to develop and deploy a Smart Sea Level Sensor Network along the coast near Savannah, Georgia. The sensors provide tidal data in an area that was previously covered by a lone tide gauge, to verify and improve predictions made by an area-specific coastal ocean model. The model will give local residents advanced warning of potential flooding events like the one that ruined that 2018 Thanksgiving day.

“The Smart Sea Level Sensors project has been successful because of the personal commitments of so many people to engage students and community members in creating solutions for adapting to the realities of sea-level rise and the broader challenges of climate change,” Clark explains.

During workshops with local stakeholders, Cobb and her colleagues took note of the absence of local minority communities. Together with her city of Savannah partners, they arranged a meeting with leaders at the Harambe House who long have worked on environmental justice issues in the city. It became clear that concerns of underserved populations differ significantly from those of wealthy coastal property owners. Communities further inland are sandwiched between a major interstate highway and the industrial operations at the Port of Savannah. In those neighborhoods, the detrimental health effects of poor air quality and exposure to industrial toxins posed much more pressing concerns than coastal flooding.

As a result, Cobb’s team developed an air quality sensor network using the same infrastructure as the sea level sensors and began deploying the network of sensors in February 2020. The leaders at Harambe House suggested focusing deployment first on local schools, where the data can be integrated into the student curriculum while monitoring the quality of the air the students breathe.

In February 2019, Cobb testified on a climate change at a hearing held by the House Natural Resources Committee. After she delivered her testimony, committee members engaged others testifying, but not Cobb, with follow-up questions. She acknowledges that the resulting discussion focusing on environmental justice was an important one.

For example, coastal wetland maintenance can help protect communities from rising seas and promote diverse ecosystems. Forest management – especially in a world with growing wildfire risks – is critical to both slowing global warming through the carbon sequestered by the trees, and minimizing hazards to communities at the forest-urban interface. However, the Australian bushfires and new research indicating that climate-related factors like worsening droughts are limiting the carbon storage potential of tropical forests worry Cobb, who described herself as “sobered to my core by the shifting landscape for forest potential,” just as the new House Republican climate plan centers around planting trees.

For Cobb, the experience helps illustrate the need for climate policy to be based on sound up-to-date climate science research, which will require better coordination between policymakers and climate scientists.

In the meantime, the Georgia Tech Global Change Program is churning out students well-informed about climate policy solutions. The program includes the Carbon Reduction Challenge, in which students design and conduct large-scale energy efficiency projects over a period of 10 weeks. The winning team in 2017 included students who had interned at Truist (formerly SunTrust) Banks. Their plan included changing the bank employee default rental car size during travel from intermediate to economy class and reducing travel by using more video conferencing. The plan was quickly implemented and saved the bank money while reducing its carbon footprint.

Cobb has also taken steps to minimize her own personal carbon footprint. She now bikes to work, composts, and dries clothes on a line, and she has installed solar panels on her home and has become vegetarian. “I just wish I’d started sooner,” she says. “But my hope is that more and more folks will pick up the cause and use their unique talents and passions to advance climate solutions at all scales.”

When she realized that air travel was her biggest source of emissions, Cobb scaled back her flights to scientific conferences and instead offered to speak remotely. In February 2020, the American Geophysical Union (AGU) retracted her invitation to be a plenary speaker at a major ocean sciences meeting because she declined to fly to San Diego, and AGU did not provide a remote speaking option. Cobb says she was incredibly disappointed.

“We’re living through an era of accelerating climate change, with thousands of AGU scientists playing a key role in documenting those indicators. I understand that it’s hard to imagine a remote keynote delivering the same value as an in-person keynote, but we’re going to have to get creative, and fast, in transitioning to alternative models. We have to start somewhere, embrace its imperfections, and improve it as we go. I’m excited that my pledge to stay on the ground for 2020 has sparked some larger conversations, and that more and more folks are joining that conversation through pledges of their own. We’ll get there, but the gears will have to grind a bit on the way.”

Cobb’s shift toward focusing more on climate change solutions, spurred by its direct impacts on her research site and coastal communities in her own state, is illustrative. She may be blazing a path for more climate scientists to follow, although she notes that academic funding and rewards structures will have to change to adjust accordingly.

“I’m incredibly heartened by the broad array of scientists who want to pivot to climate solutions research. From social scientists to natural and physical scientists, the response to large-scale projects focused on climate solutions has been amazing. People want to do this work, to lend their talents, to learn new techniques and new applications. We know what’s required, and it’s not what we learned in graduate school,” she says.

“Funding streams generally do not reflect this drive towards transdisciplinary research, and accordingly many scientists are stuck in funding ruts to keep their labs afloat, even while they devote time and energy to unfunded work on climate solutions,” Cobb says. “That situation could change as the rewards of this new research roll out in coming years. In the meantime, there is an emerging generation of students already benefiting from these early forays. They can chart careers in climate solutions that I can only dream of right now.”