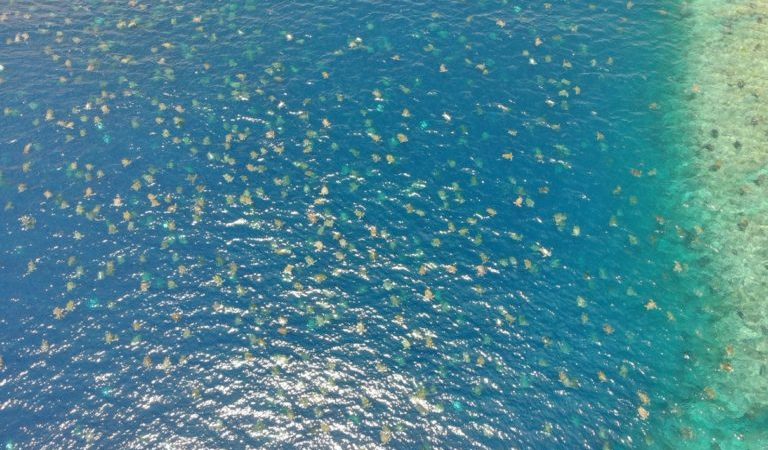 From high above, the blue sea looks like it’s speckled with tiny white dots. But a closer look reveals more: each dot is actually a sea turtle swimming toward the shore of a coral cay. There are thousands of them. Over the course of the nesting season, about 64,000 landed on the beach.

In previous years, researchers surveyed the green turtle population by painting white stripes on their shells with non-toxic paint while the turtles nested in the sand, then manually counted them offshore.

“From a small boat, we then counted painted and non-painted turtles, but eyes are attracted much more to a turtle with a bright white stripe than an unpainted turtle, resulting in biased counts and reduced accuracy,” Andrew Dunstan, from the Queensland state government’s Department of Environment and Science (DES), said in a statement.

The use of a drone, or unmanned aerial vehicle (UAV), proved much more effective. Researchers were able to analyze each frame of the video, and accurately count the number of painted and non-painted turtles. The team recently published their findings in the journal PLOS ONE.

“When we compared drone counts to observer counts we found that we had underestimated the numbers in the past by a factor 1.73,” Richard Fitzpatrick, principal scientist at Biopixel Oceans Foundation and co-author of the paper, said in a statement. “By using drones we have adjusted historical data. What previously took a number of researchers a long time can now be done by one drone operator in under an hour.”

Green turtles are an endangered species, according to the IUCN, the global authority on the conservation status of biological species. Threats include the intentional harvesting of eggs, disease, light pollution, habitat degradation, and fishing net entanglement. But in recent years, there’s been an uptick in green turtle nesting, which scientists believe is due to expanded conservation efforts and fishing moratoriums.

Raine Island itself has noticed a recent upsurge in turtle nesting. The last two seasons, only about 20,000 turtles nested on the island, a spokesperson for the Great Barrier Reef Foundation stated. This season, there was a marked increase to about 64,000 nesting turtles.

To ensure that green turtles continue to nest on Raine Island, the team at the Raine Island Recovery Project are working to re-profile the beach to make it more habitable for nesting turtles, and to fence off any eroded sections of the beach to prevent turtles from falling off any steep edges.

“Raine Island is the world’s largest green turtle nesting site and that’s why we’re working … to protect and restore the island’s critical habitat,” Anna Marsden, managing director of the Great Barrier Reef Foundation, said in a statement. “We’re taking action to improve and rebuild the island’s nesting beaches and building fences to prevent turtle deaths, all working to strengthen the island’s resilience and ensure the survival of our northern green turtles and many other species.”