advertisement
Home Climate Why Are Women More Vulnerable to Flooding in India? 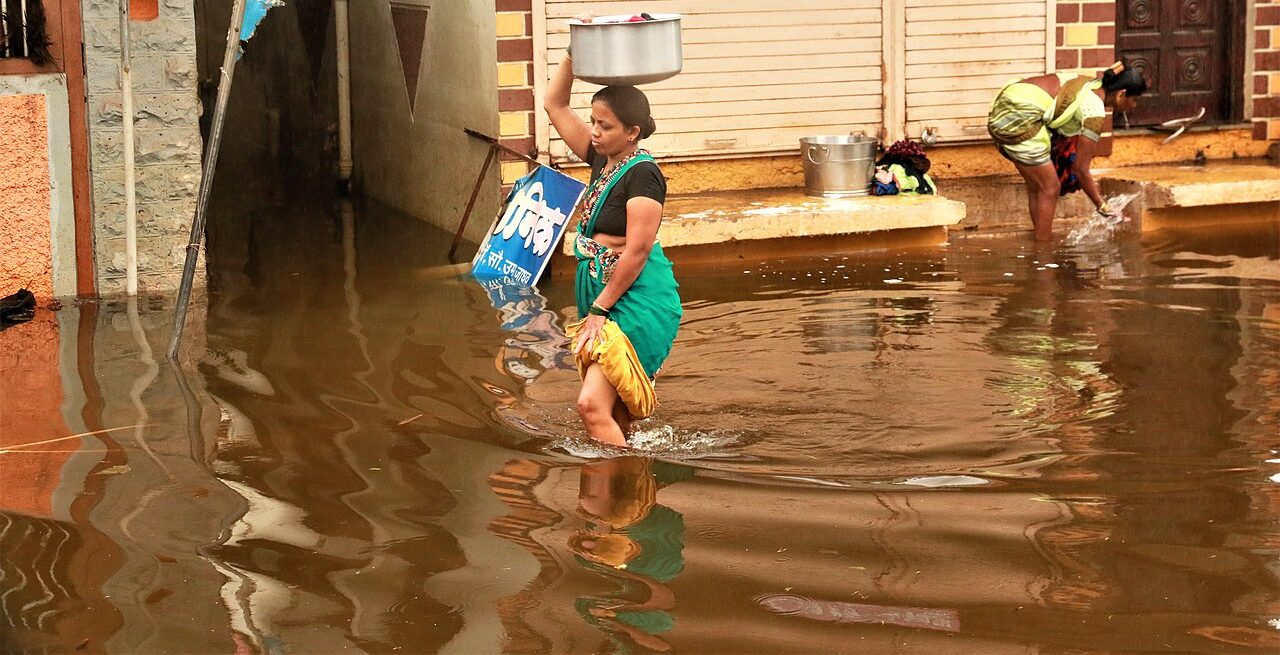 In India, floods are the most frequently occurring natural hazard, accounting for 47 percent of all natural disasters and claiming 1,700 lives per year on average. Although studies have shown women to be more vulnerable to natural disasters, so far there is little information on whether or how floods disproportionately impact women in India.

A new study attempts to address this lack of data. The study modeled the impact of floods on gender mortality in India against the inequality-adjusted human development index (IHDI), a measure of inequality in human development. According to the United Nations, “the IHDI combines a country’s average achievements in health, education and income with how those achievements are distributed among country’s population by ‘discounting’ each dimension’s average value according to its level of inequality.”

The authors used state-level data for 19 Indian states from 1983 to 2013, along with household-level data from the India Human Development Survey (IHDS-II) to analyze the social and cultural norms that affect women, such as participation in elections and mobility. Flood mortality data were taken from the National Crime Records Bureau of India for the study period.

The study found that although an increase in IHDI minimized both male and female flood mortality, female mortality was not as reduced as male mortality. Researchers say this difference suggests that inequality in development has a differential impact on women. The study will be published in World Development.

Joyita Roy Chowdhury, one of the study authors and an assistant professor of economics at FLAME University, Pune, India, explained the findings by acknowledging that women frequently engage in outdoor farming activities in India. “In rural India, women’s involvement in agriculture is substantially high, making women more vulnerable to flood. This is compounded by social norms where women have to take care of children and are unable to move to other occupations.”

Neha Pahuja, an Earth science and climate change fellow at The Energy and Resources Institute, Delhi, agreed with Chowdhury. “Because of cultural norms and the inequitable distribution of roles, resources, and power,” she wrote via email, “women in India are more vulnerable (to flooding).”

Pahuja, who was not involved in the research, added that the new study reinforced the fact that greater participation of women in political decisionmaking is required to bridge the gap of inequality.

“Women’s participation is an indicator of empowerment,” Chowdhury said. “When they cast their vote or participate in [village] meetings, they gain information about development policies and how to protect themselves from disasters.”

The state of Kerala, for example, has a Gender Equality and Women’s Employment Policy that aims to mainstream gender issues in all state policies and projects and provide equal access to resources and economic, social, and political opportunities. One of the points in the policy states that the participation of both men and women will be ensured in programs for environment, conservation, and adaptation to climate change.

Vidya Soundarajan, a climate finance expert at WWF India who was not involved in the study, said via email that “there are two key aspects of the flood impact on women in Bihar. [First,] since open defecation is still quite prevalent, it becomes nearly impossible for women to find a safe place to defecate, which leads to numerous health issues.”

Second, she added, men leave for urban areas in search of jobs because of recurrent floods and related agricultural losses, leaving women in villages even more vulnerable.

Soundarajan said that creation of toilets on higher ground in flood-prone areas, job opportunities, and early-warning systems could help mitigate the impact of flooding on women.

Kerala, the state with the highest IHDI, was found to have the lowest number of female deaths from floods. Chowdhury attributed this to policies aimed directly at women. “Some states like Kerala have a budget for women specifically,” she said. “When there is a higher expenditure on empowering women, they know how to access information, how to communicate with outsiders.”

In addition to the Gender Equality and Women’s Employment Policy, for example, Kerala also established a Kudumbashree scheme to empower poor women. In the program (named from the Malayalam “prosperity of the family”), women from lower economic strata participate in neighborhood or community group meetings to further developmental goals and secure economic opportunities. Leadership roles are held by women on a rotating basis, ensuring that all women members get a chance at leadership.

Policies like these do not directly affect mortality but have an indirect impact, Chowdhury explained.

Pahuja added that when women are in control of resources, they are more likely to adapt strategies in response to information and make decisions that minimize risk.

Adaptation to climate change depends on one’s capability to cope and recover. With extreme weather conditions such as floods expected to increase, “it is imperative that gender equality and women’s empowerment continue to influence, shape, and drive the collective climate and human development effort,” said Pahuja.