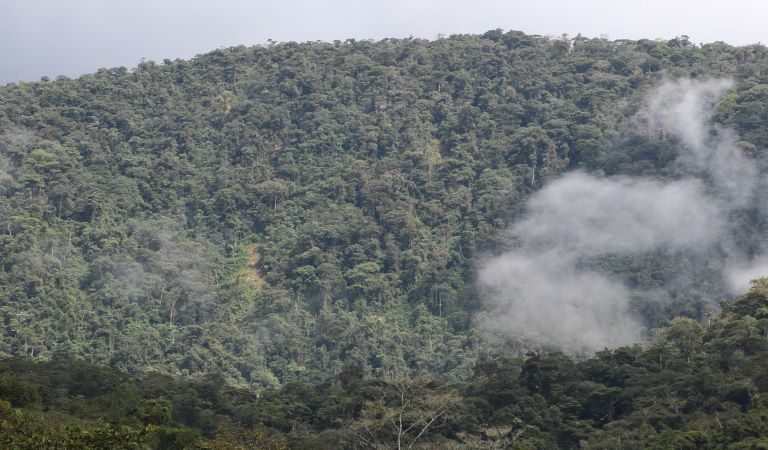 An Indigenous community in Ecuador has finally obtained national protections for part of its territory after decades of fighting off deforestation and pollution in its mega-diverse rainforests.

Ecuador’s National System of Protected Areas now includes the 5,497-hectare (13,583-acre) ancestral Tiwi Nunka Forest, which the Shuar Indigenous community of El Kiim lives in and relies on for sustenance and many cultural practices.

The decision means that the land should be safe from future exploitation, including mining, cattle ranching and agricultural encroachment — activities that have worried the community’s 35 Shuar families for decades. It also means that the community is free to sustainably manage the local natural resources as it sees fit.

The area is not only home to many of the community’s ancestral traditions, such as collecting and making medicines and performing ritualistic waterfall baths, but also important biodiversity like the mountain tapir (Tapirus pinchaque) and spectacled bear (Tremarctos ornatus). The forest is also a source of clean water for the community.

“We’re protecting the forest because these are the last trees we have for wood and medicine,” said Washington Tiwi, a resident of El Kiim and former head of the community. “Some species, such as bears, howler monkeys and tapirs, are protected from disappearing. Our children and future generations can see them and know that these species exist and are protected.”

A long history of territorial disputes

The story of the Tiwi Nunka Forest is one of near-constant struggle and loss. In the 1950s, the community was forced off its land when settlers arrived to preach Christianity and clear the area for agriculture. Some Shuar children from El Kiim were kidnapped in canoes and taken to mission settlements downriver, according to oral histories from community elders.

For decades, due to the relocation, it looked like the group’s history and traditions would disappear. Everyone was learning Western cultural practices and new religious traditions. But decades later, after some of the kidnapped children had grown up, the Shuar started returning to their original territory.

They found highways, cattle ranches and farms developed by mestizo Ecuadorans, many of whom had something the Shuar did not: legal documents to support their claims to the area.

At that time, a group of Shuar managed to occupy a small patch of still-unclaimed land. And although it was less productive than other areas, they were determined to stay there and resurrect their lost traditions, as well as to get back the rest of what had been taken from them.

“Our fathers and mothers didn’t know how to read or write,” said Tiwi. “But they had many other impressive talents, especially when it came to managing economic resources and holding meetings to resolve conflicts and delegate work.”

They did their best to protect the ancestral forests under threat from an ever-growing influx of settlers intent on clearing the land for cattle pasture. In the 1990s and early 2000s, the community tried to follow the formal path to establishing an almost 7,000-hectare (17,300-acre) protected reserve. But no one had the legal knowledge or government connections to see it through.

They also felt limited in what they could do because of their distance from the capital, Quito, where officials seemed to be making many decisions without them.

“Politicians don’t have the will or desire,” Tiwi said. “Every time there’s a change in personnel, the people who come in don’t know that the paperwork was already underway, and so they have to start the process over.”

A bureaucratic battle ends in victory

Several Indigenous advocacy groups have tried to help the Shuar obtain official protections for their land while also developing sustainable agroforestry practices. But they often ignored the Shuar’s traditional cultivation methods, residents told Mongabay, or didn’t know the land well enough, ultimately leaving the community with nothing to show for their efforts.

It wouldn’t be until 2005, when the NGO Nature and Culture International came to the area, that the community started to see real change. By 2008, the NGO had managed to help the Tiwi Nunka Forest gain “protective forest and vegetation area” status. In May 2021, the Ministry of Environment and Water approved the Shuar’s 5,674-hectare (14,021-acre) land title, meaning they were officially owners of the land.

These were good first steps. But the community was still worried about extractive activities. Per Ecuadoran law, mining concessions can still be granted in protected forests because the protections — similar to land ownership in the country — only applies to the surface soil. Everything underneath is still technically open to exploitation.

“We don’t have any artisanal mining,” said resident Jose Asamat, who said he was worried about new waves of miners coming in. “We don’t know what minerals are up there in the mountains and the hills. Nobody knows.”

But now, with this month’s announcement from the National System of Protected Areas, no one can touch the land and its resources except the Shuar.

“Nature gives us many things to survive and that’s why we need to conserve this protected area,” said Milton Asamat, president of the Shuar Kiim Center. “Our elders left us as an inheritance to take care of nature and all species. We want to conserve the water, the plants and everything that has life.”