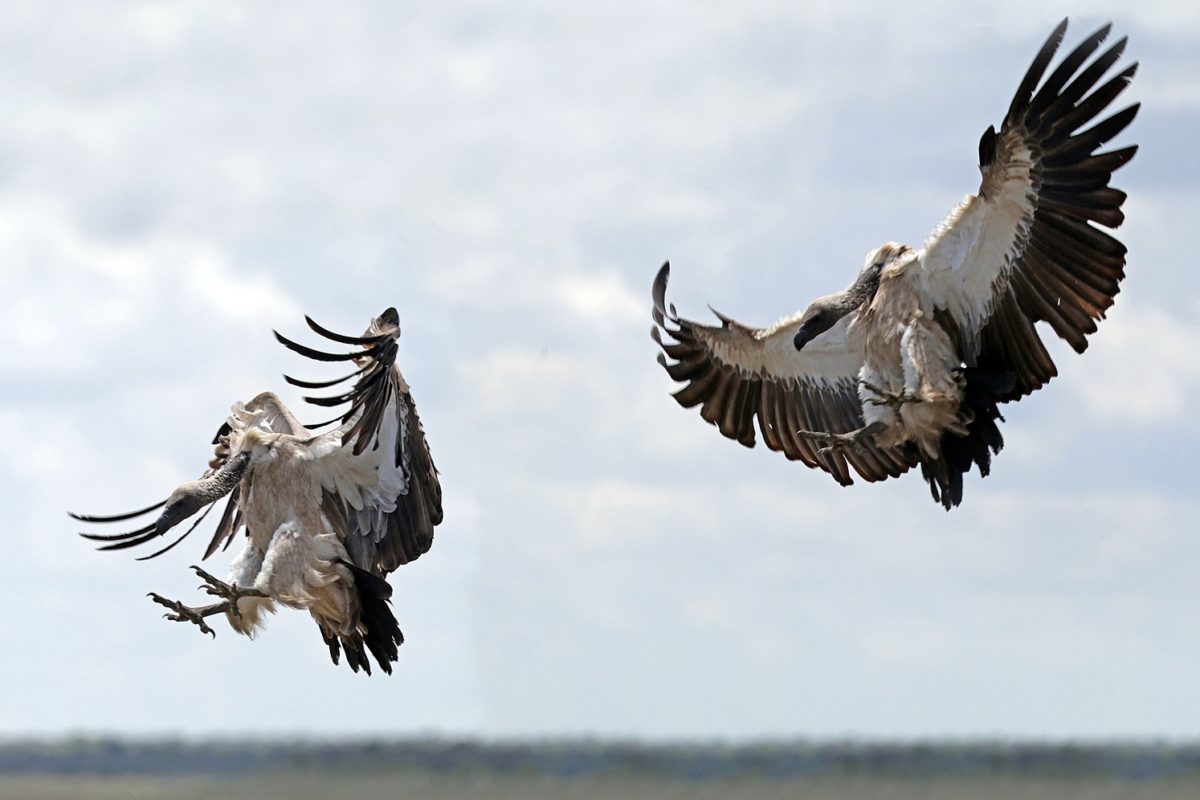 Four species of critically endangered vulture have returned to a park in southern Malawi from which they disappeared more than 20 years ago, and their comeback is credited to the reintroduction of cheetahs, lions and the carcasses the cats left behind, conservationists say.

In 2017, seven cheetahs (Acinonyx jubatus) were reintroduced to Liwonde National Park under a project run by African Parks and the Endangered Wildlife Trust (EWT), two conservation groups working in partnership with Malawi’s Department of National Parks and Wildlife (DNPW).

Within days, and with the cheetahs still in their acclimatization pen or boma, the vultures showed up.

“We made a bit of a carcass pile not far from the boma,” recalls Olivia Sievert, head of biodiversity research at the Lilongwe Wildlife Trust, a conservation NGO that monitors carnivores in the park.

She and other members of her team set up a camera trap near the carcass pile. They expected to capture images of spotted hyenas (Crocuta crocuta), a species they were monitoring. But they were in for a surprise.

“We started getting vultures on camera traps,” says Sievert. “By the second week of the cheetahs being in the boma the vultures were in the trees around the boma, which was very exciting to see.”

The cheetah reintroduction project has been successful. The population within the 548,000-hectare (1.3 million-acre) park reached 42 at the last count, according to a recent paper in Oryx authored by Sievert. A second generation of cheetahs are now breeding and raising cubs.

Lions were introduced months after the cheetahs, helping to boost the availability of food for the vultures.

Vultures – and cheetahs and lions – disappeared from Liwonde and a number of other protected areas in Malawi in the wake of a poaching crisis in the 1990s and early 2000s.

One effect of the vulture extirpation meant that animals that died from natural causes weren’t picked clean by the birds, whose ability to rapidly consume carcasses and the potentially fatal human and livestock diseases they harbor is legendary.

Other birds of prey – bateleur and tawny and fish eagles, marabou storks and ospreys that would usually be pushed aside by the vultures – became more active as scavengers, Sievert says.

But they weren’t nearly as efficient.

“We had a lot more carcasses just rotting away, especially in the dry season when we start losing a lot of animals in the open floodplains,” she explains.

Older animals were simply keeling over from old age, something that wouldn’t happen if cheetahs and lions were around to pick them off earlier.

Surprisingly bushpigs (Potamochoerus porcus) were recorded doing most of the scavenging in Liwonde. The animals are better-known for eating grass and roots.

“We definitely saw an increase in some of the scavengers that you don’t normally see scavenging in parks that have proper full ecosystems,” Sievert says.

The return of the vultures was, therefore, hugely welcome. The first two species to arrive back in Liwonde in 2017 were critically endangered white-backed (Gyps africanus) and hooded vultures (Necrosyrtes monachus). They included one bird that had been tagged in the nest in the Imfolozi Game Reserve, in South Africa’s KwaZulu-Natal Province, around 2,500 kilometers (1,500 miles) to the south.

To top it all, last year park managers found three white-backed vulture nests built in the crowns of tall borassus palms (Borassus aethiopum). These were the first active breeding records of vultures in Liwonde for more than two decades.

“It really is encouraging to see. It’s one of the good news stories that we are eager to share with people,” says Andre Botha, the Endangered Wildlife Trust’s Vultures for Africa program manager.

Effective management of the park by African Parks via its public-private partnership with the DNPW, also played a key role in the vultures’ return, he says.

It has created a safe space for the cheetahs, the lions and the vultures to flourish.

Poisoned and on the decline

Good news about Africa’s vultures is normally hard to come by. Indiscriminate or deliberate poisoning, collisions with electricity cables, and habitat loss have driven down their numbers.

A 2015 study, still considered the standard text on this decline, found populations of seven species of African vulture had dropped by 80 percent or more over three generations.

Poison is very often “the tool of choice” to hunt and kill animals across Africa, explains Botha, who is also co-chair of the IUCN’s Vulture Specialist Group.

It is used with devastating effect against predators like lions or hyenas or jackals as revenge for attacks on farmers’ livestock, or for other purposes like poaching elephants for their ivory. Vultures are very often the intentional or unintentional victims.

Memories are still fresh of the deliberate poisoning of more than 2,000 hooded vultures in the West African nation of Guinea-Bissau in 2020, reportedly for belief-based use of the birds’ body parts.

Some vultures tracked by the EWT in Southern and East Africa, however, are fitted with mortality sensors. If a bird with a satellite tag dies, Botha and his team can alert people on the ground – through training provided by the EWT – to respond more quickly to possible poisoning incidents.

“The impact of the poisoning should be reduced,” he says.

One person who can testify to the devastating effect of poisoning in Liwonde in the past is Tiwonge Mzumara-Gawa, an ecologist at the Malawi University of Science and Technology, who is not involved with the cheetah reintroduction project.

Back in 2006, Mzumara-Gawa came upon dozens of Lilian’s lovebirds (Agapornis lilianae) – a near-threatened species of tiny green parrot – lying dead from poison laid by poachers beside a water hole in the park.

Poisoning had already taken its toll on the park’s vultures and Mzumara-Gawa, a regular visitor to Liwonde, had grown used to never seeing them circling in its skies.

“I do think it’s very encouraging to have vultures come back to Liwonde,” she said. “It’s much better than the situation before where we just had animals rotting away because there were very few scavengers to take care of the animals that had died.”

Deforestation is another threat to the lovebirds that Mzumara-Gawa now works to research and protect, and the vultures she and others are welcoming back.

The demand for charcoal has denuded much of Malawi’s landscape outside of protected areas. Controversially, Malawi’s largest illegal logging case took place in 2017 within one key national park, Lengwe, to the south-west of Liwonde. More than 2,000 hectares (4,900 acres) of the 88,700-hectare (219,000-acre) park were lost, according to the Lilongwe Wildlife Trust.

“With the recovery of the vultures we need to protect the large trees that they like to nest in, and ensure that they’re available for them to continue to nest,” says Mzumara-Gawa.

Lengwe and the Majete Wildlife Reserve, also in the south-west, are critical to Liwonde’s new vulture population. Data gathered from tagging white-backed vultures in Liwonde last year, and published recently, revealed that the birds were moving between all three protected areas to feed.

Other vultures tagged in Liwonde have been found in protected areas beyond Malawi’s borders. Botha says one of the tagged birds has been recorded in the Niassa Special Reserve, in northern Mozambique; others as far south as Gorongosa National Park in central Mozambique.

For Malawi’s small breeding population of vultures, protected areas like Liwonde, Lengwe and Majete, where a second population of cheetahs has now been established, are safe havens. So are those in neighboring countries.

“All these areas are vitally important for vultures and for the prey that they feed on,” says Botha. “Healthy carnivore populations are an integral part of that.”