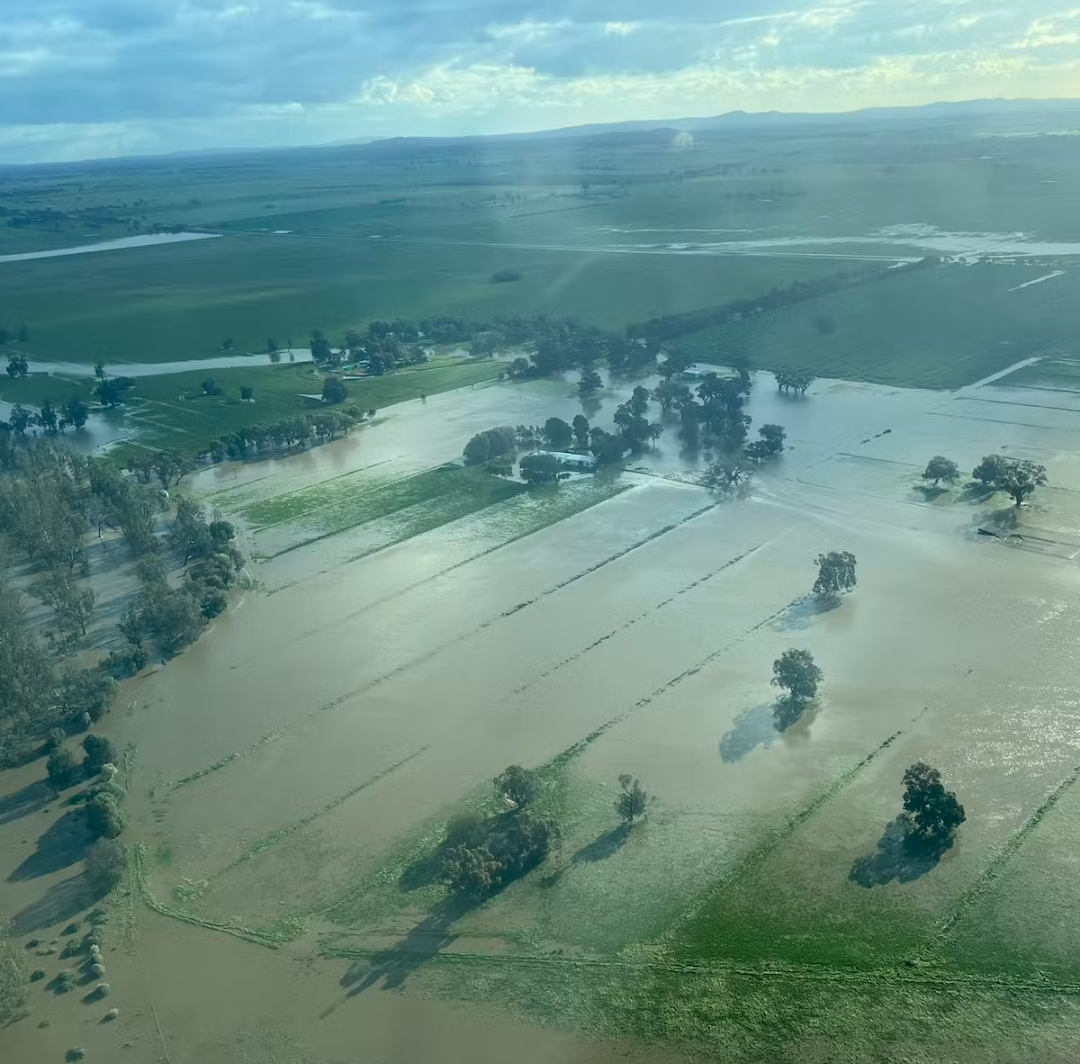 Some of Victoria’s most important agricultural regions are among the areas worst hit by severe floods inundating the state this week.

This may lead to food shortages and higher supermarket prices for milk, fruit, vegetables and other farm products. Indeed, about 20 percent of Victoria’s milk is produced in flood-affected regions, and millions of litres now may be lost.

For farmers, the floods will certainly be devastating. Over the last five years, Australian farm businesses have faced a relentless string of extreme events, from drought to unprecedented bushfires.

Farmers face a multitude of challenges in future. Climate change is projected to lead to more frequent severe floods, as well as other climate extremes such as heatwaves and drought. How do farmers adapt to these changes and how can governments support them?

Some of the areas hardest-hit by current flooding are in northern Victoria, including Shepparton, Rochester and Echuca – some of Victoria’s most important growing regions.

The damage floods inflict on farms can last long after the water has receded. Farm activities may be interrupted by water-logged soils for days or weeks. Fertile topsoil also can be lost due to water erosion, potentially leading to long-term yield declines.

Livestock can also be harmed. For example, the 2019 flood in Queensland killed hundreds of thousands of cows. Surviving, flood-affected livestock can suffer long-term health conditions, including parasites and bacterial infections, and this has big implications for animal welfare and farm productivity.

The indirect impacts of flooding on farm businesses can be equally harmful. For example, when roads are blocked, agricultural products cannot be transported to processing facilities or retailers.

Power outages also mean many Victorian farmers cannot milk their cows, or must dispose of milk that cannot be transported to processing sites in time. This may lead to large losses for producers and higher supermarket prices for consumers.

Floods are just the beginning. Farmers face a range of climate extremes, which are becoming more frequent and severe with time. Over recent decades, global warming has shifted Australia’s climate towards higher temperatures and lower winter rainfall, posing significant challenges for farmers.

In fact, changes in climate between 2001 and 2020 (relative to 1950 to 2000) have reduced annual average farm profits by an estimated 23 percent, according to modelling by the Australian Bureau of Agricultural and Resource Economics and Sciences (ABARES). The most severe impacts have been seen in south-western and south-eastern Australia.

Even more challenging have been the observed changes in climate variability and extremes, such as increases in the risk of bushfires or severe flooding. These are less predictable and more difficult to adapt to than relatively gradual changes.

Such compounding events can overwhelm the capacity for farmers, emergency services and the broader community to cope.

The extremes of the last five years are a clear example. Severe drought in 2017-2019 was followed by the devastating bushfires in 2019-2020, before three consecutive flooding years due to La Niña.

The drought, for instance, caused wheat production in 2018-2019 to drop to its lowest level since 2008 (down by 16 percent compared to the previous financial year), and rice and cotton production were down by 90 percent and 56 percent.

Climate change is projected to further increase the severity and frequency of many types of climate extremes, depending on global greenhouse gas emissions. Australia will be particularly affected, as hotter temperatures and less rainfall will make parts of Australia more arid.

It’s important to note that such extremes poses significant threats to the mental health of farmers and rural communities.

Research this year, for example, investigated drought and mental health in Australia’s rural communities. It found that each year on average, 1.8 percent of suicides among rural working-age men could be attributed to drought. Under the driest future climate change scenario, this will increase to 3.3 percent.

What can farmers do to adapt?

Australian farmers are experienced in managing climate variability and extremes, and continuously adapt to changes by modifying current farm management practices to reduce risks. These strategies include:

Farmers also adapt by diversifying their farms. For example, they might transition from purely cropping to mixed crop-livestock farming.

Another important way farmers can adapt to extremes is by using forecasting information. Farmers make use of a wide range of weather and commodity price forecasts to prepare for the season ahead. This includes the Bureau of Meteorology’s seasonal climate and water outlooks, ABARES’ agricultural outlook and forecasting information provided by state departments and agricultural consultancies.

New climate information services that are more specific to the needs of agricultural managers have become available. Still, more research is needed to further improve and tailor forecasts, to help farmers make better decisions and manage the risks of climate extremes.

Government support is also crucial to help Australian farmers adapt to climate change. Another important area where governments can provide valuable support is by funding research and development into adapting agricultural production and supply chains.

A good example is the Future Drought Fund, which supports research and innovation to enhance drought preparedness in the agricultural sector.

But ultimately, the most important way to cope with future climate change is by reducing greenhouse gas emissions. Until we reach net-zero emissions globally, the planet will continue to warm and climate extremes will become more likely and more severe in many regions.