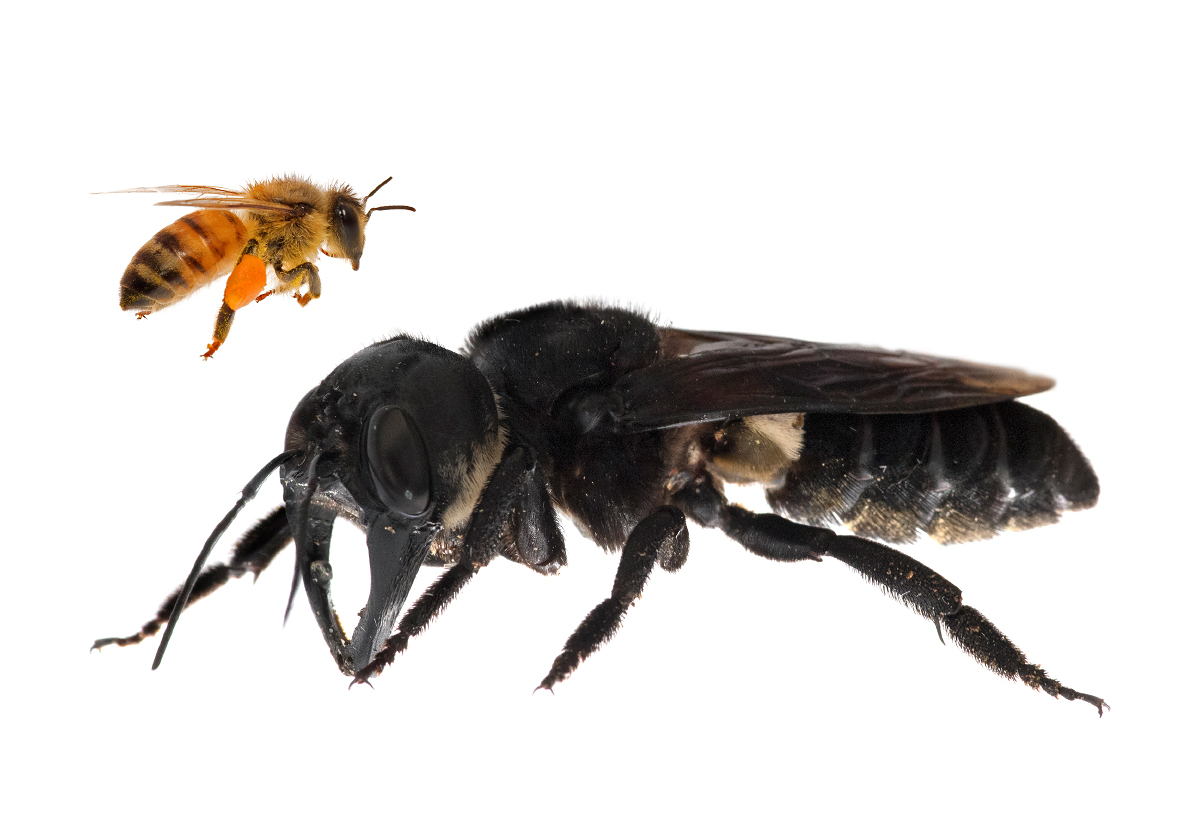 Last month a search team embarked on a journey to Indonesia to find the “holy grail” of bees.

The world’s largest bee, initially discovered by British naturalist Alfred Russel Wallace in 1858, had not been seen since 1981.

The team, which included Simon Robson, honorary professor of biology at the University of Sydney and Central Queensland University in Australia, and Glen Chilton, a professor at Saint Mary’s University in Canada, rediscovered Wallace’s Giant Bee in the Indonesian Islands of North Moluccas.

The elusive bee makes it home in termite mounds.

While there were dozens of termite mounds to explore, it wasn’t until the final day of a five-day stop in an area of interest that the team came across a female Wallace’s giant bee inhabiting a termites nest, eight feet above the ground.

“Bracing the rotting tree, I asked Iswan if he would mind climbing up to take a look inside. As he peered inside the nest he exclaimed, ‘I saw something move!’ Jumping down, for fear that the creature was a snake—his worst fear—after catching his breath, he said that it looked wet and sticky inside. Eli and I looked at each other with reserved excitement. Eli climbed up and immediately felt for certain that it was a bee nest. The structure was just too perfect and similar to what we expected to find. I climbed up next and my headlamp glinted on the most remarkable thing I’d ever laid my eyes on. I simply couldn’t believe it: We had rediscovered Wallace’s Giant Bee,” said Clay Bolt, a natural history and conservation photographer specializing in North American bees.

“It was absolutely breathtaking to see this ‘flying bulldog’ of an insect that we weren’t sure existed anymore, to have real proof right there in front of us in the wild,” said Bolt, “To actually see how beautiful and big the species is in life, to hear the sound of its giant wings thrumming as it flew past my head, was just incredible. My dream is to now use this rediscovery to elevate this bee to a symbol of conservation in this part of Indonesia, and a point of pride for the locals there.”

For Global Wildlife Conservation (GWC), Wallace’s giant bee marks the second rediscovery of one of their top 25 most wanted species in their Search for Lost Species initiative.

The Search for Lost Species is the world’s most extensive effort to find and protect species that have not been seen in the wild for decades. GWC, alongside more than 100 IUCN Species Survival Commission’s Specialist Groups, compiled a list of 1,200 lost species from around the world.

“The rediscovery of any of these elusive species will help unlock its mysteries, providing us with the valuable information we need to understand and best conserve the species, its habitat and the wildlife that share its habitat. While we’re not sure how many of our target species we’ll be able to find, for many of these forgotten species this is likely their last chance to be saved from extinction.”

Since its launch in 2017, there have been a total of three rediscoveries:

While the rediscovery of Wallace’s giant bee is undoubtedly a cause for celebration, efforts will need to be made to ensure the species survival.

“The bee’s protection moving forward is going to rely first on the appropriate government officials and stakeholders knowing that the bee even exists, and then their willingness to help protect it. By making the bee a world-famous flagship for conservation, we are confident that the species has a brighter future than if we just let it quietly be collected into oblivion,” stated Moore.


Header image: One of the first images of a living Wallace’s giant bee. Megachile the world’s largest bee, which is approximately four times larger than a European honeybee. ©Clay claybolt.com