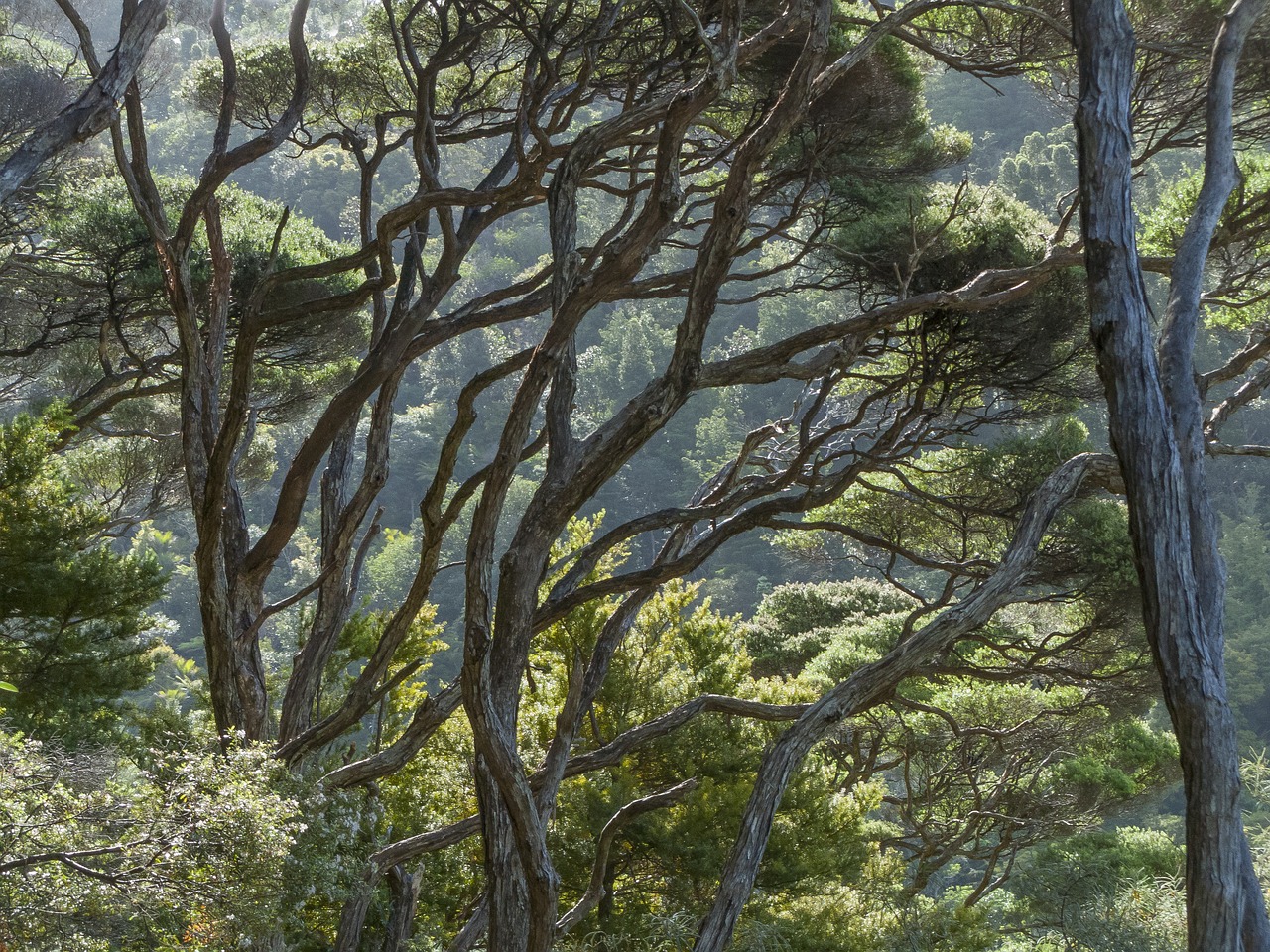 Indigenous ways of managing landscapes have often been framed as the antithesis to progress. But most Indigenous communities hold intimate place-based knowledge, gained across generations, which is an ideal starting point for addressing contemporary challenges such as biodiversity loss, land degradation and climate change.

Here are seven ways that Indigenous knowledge is translated into vital inventions for conserving and restoring landscapes around the world. In fact, this ancient know-how might just be some of the modern technology we have.

In 2017, the wind-borne plant disease known as myrtle rust hit New Zealand’s shores. The pathogen affects species in the Myrtaceae family, which means that around 50 of the country’s native trees and plants – most of which are found nowhere else on the planet – could be susceptible to it.

Now, Indigenous Māori are working alongside NGOs and researchers to guard against the extinction of treasured species by creating seed banks using traditional collection protocols. “We looked at Māori traditional and contemporary knowledge around what trees are best to collect seeds from,” says researcher Nick Waipara of Te Tira Whakamātaki(the Māori Biosecurity Network). “A lot of the communities are doing revegetation and restoration of native plants and forests, and so our people are already collecting seeds from the best, brightest and healthiest trees for our own nurseries.”

He adds that Māori also have their own priority tree specimens and areas that need to be represented within the seed banks. “For example, some of the big coastal pōhutukawa (Metrosideros excelsa) have cultural or spiritual significance for some iwi (tribes) because they’re the trees that the first waka (migration canoes) anchored up onto.”

Aboriginal communities in the Kimberley region of Western Australia have been managing fire for millennia by lighting ‘cool’ fires in targeted areas at the beginning of the dry season. The fires burn slowly, reducing the amount of fuel in the undergrowth and creating fire breaks while keeping most taller trees standing and maintaining habitat for wildlife.

When European colonizers took Aboriginal peoples from their land, large and uncontrolled wildfires began to break out later in the dry season, destroying ecosystems and often impacting pastures and infrastructure, too.

The Kimberley Land Council (KLC) is an association and representative body for Kimberley traditional owners who have regained titles to some of their land in the past two decades. Since then, the KLC has established an Indigenous fire management program in the land it oversees, using traditional knowledge and techniques alongside Western science and technology to burn carefully and reduce the risk of uncontrolled wildfires.

The Hin Lad Nai community in the Chiang Rai Province of northern Thailand is innovating through new methods of crop rotation – which it has practiced in different forms for generations – to help soil recover quickly after periods of intensive cultivation.

Community members have begun planting the indigenous p’dav tree [Macaranga denticulata] on degraded, infertile land, with dramatic results. The p’dav tree grows rapidly and protects the soil from invasive weeds. After a couple of years, it begins to shed its leaves, which keep the soil surface cool, hold rainwater and turn into rich black soil. Shade-loving crops like coffee can then be grown underneath it.

The fruit provides valuable fodder for domestic animals, as well as attracts wild animals that farmers can hunt and trap for food. Its flowers are favored by bees and other pollinators, which contribute to the ecosystem’s health and provide the opportunity for farmers to collect and sell bush honey.

After around five years, the trees can be felled for firewood and the area farmed productively once again. The practice is one of a number of ever-evolving shifting cultivation methods that farmers have developed across the globe to keep soil in good health.

Intercropping corn, beans and squash – the ‘three sisters’ – together in a particular arrangement is a traditional agricultural system that is often attributed to the Haudenosaunee/Iroquois people of the southern Great Lakes area in what is now the U.S. and Canada but believed to be widespread throughout the Americas.

The crops complement each other in a number of ways. Beans fix nitrogen in the soil so the other plants can take it up; corn acts as a pole for the beans to climb around, and the squash’s large leaves shade the soil, preventing evaporation and weed growth. The squash also has spiny leaves that discourage animal pests from entering the area. A recent study showed that planting according to this technique yielded significantly more protein and energy than growing each crop as a monoculture.

Nutritionally, the crops are complementary too, providing carbohydrates (corn), vitamins (squash) and protein (beans). Also, since each crop is from a different family, they’re unlikely to fall prey to the same diseases, so the system is more resilient than a monoculture.

The technique has been popularized by the permaculture movement and is now practiced by gardeners around the world.

The small West African nation of Burkina Faso reaches north into the Sahel, a semi-arid zone stretching across the breadth of the African continent just south of the Sahara Desert. The area is on the front line of the fight against desertification, to which 12 million hectares of land are lost every year.

As the desert advances in northern Burkina Faso, it is becoming increasingly difficult to restore degraded, hardpan soils that cannot be plowed. In the 1970s and 1980s, some farmers began reviving traditional farming techniques in the wake of a series of severe droughts. They started planting in zaï pits, which are holes dug into the soil and filled with organic matter like crop waste or manure. This leads to increased termite activity in the soil, which can then capture and store more moisture when the rains come. The farmers also began building stone bunds around these plantings to slow down water runoff.

The results were impressive. “Despite serious drought that was harming more and more people, I was able to feed my family more and more easily – right since the first harvest,” pioneering farmer Yacouba Sawadogo told audiences at the Global Landscapes Forum in Bonn in December 2018.

Since then, Sawadogo and his contemporaries have developed a network of ‘zaï schools’ to train other farmers and share knowledge about the technique. These days, zaï pits are promoted regionally by NGOs such as Oxfam and held up internationally as an important restoration tool.

Rather than looking at linear calendars to make decisions about how and when to do particular things, Indigenous groups in the northwest U.S. traditionally hold in mind a “3D, nonlinear set of aspects that includes all of the environmental cues,” says researcher Samantha Chisholm Hatfield of Oregon State University, a Cherokee member of the Confederated Tribes of Siletz Indians. “It’s multigenerational information that goes into a much larger data set,” she says.

Chisholm Hatfield describes how the Siletz Indians traditionally eat Pacific lamprey eels[Entosphenus tridentatus], which they catch when the adult fish migrate upstream to spawn. “They would put people out to watch for what we would call the eel ants [Camponotus spp. or carpenter ants], and when they saw them, everyone would hear,” she says. “They’re completely separate species and there’s no correlation whatsoever, except that it’s a timing event that is cyclical with that seasonality and that process.”

As climate change plays havoc with contemporary understandings of our seasons and cycles, these much older data sets, and the ability to observe cues, are becoming increasingly important. “It’s about watching to see how the environment is responding to what’s going on,” says Chisholm Hatfield.

Lima is the world’s second-largest desert city, and providing a reliable water supply to its nearly 10 million inhabitants across the seasonal extremes of floods and droughts is a serious challenge. As the population expands and climate change threatens glacial water sources, the issue is becoming increasingly urgent.

So, scientists and farmers are working together to restore a system of ancient canals, believed to be older than the Inca Empire itself. The system builds delays into the runoff from highland streams by channeling water into the mountain, where it slowly seeps through cracks and aquifers and emerges in springs and reservoirs months later. This means that when the wet season is over, there is still water around to last through the drier periods.

The approach looks set to be a cheap and effective alternative to conventional solutions, says Locatelli, so governing bodies have pricked up their ears. “Especially in the context of a new law on payment for hydrological services, drinking water utilities are supporting the restoration and management of such traditional practices,” he says.