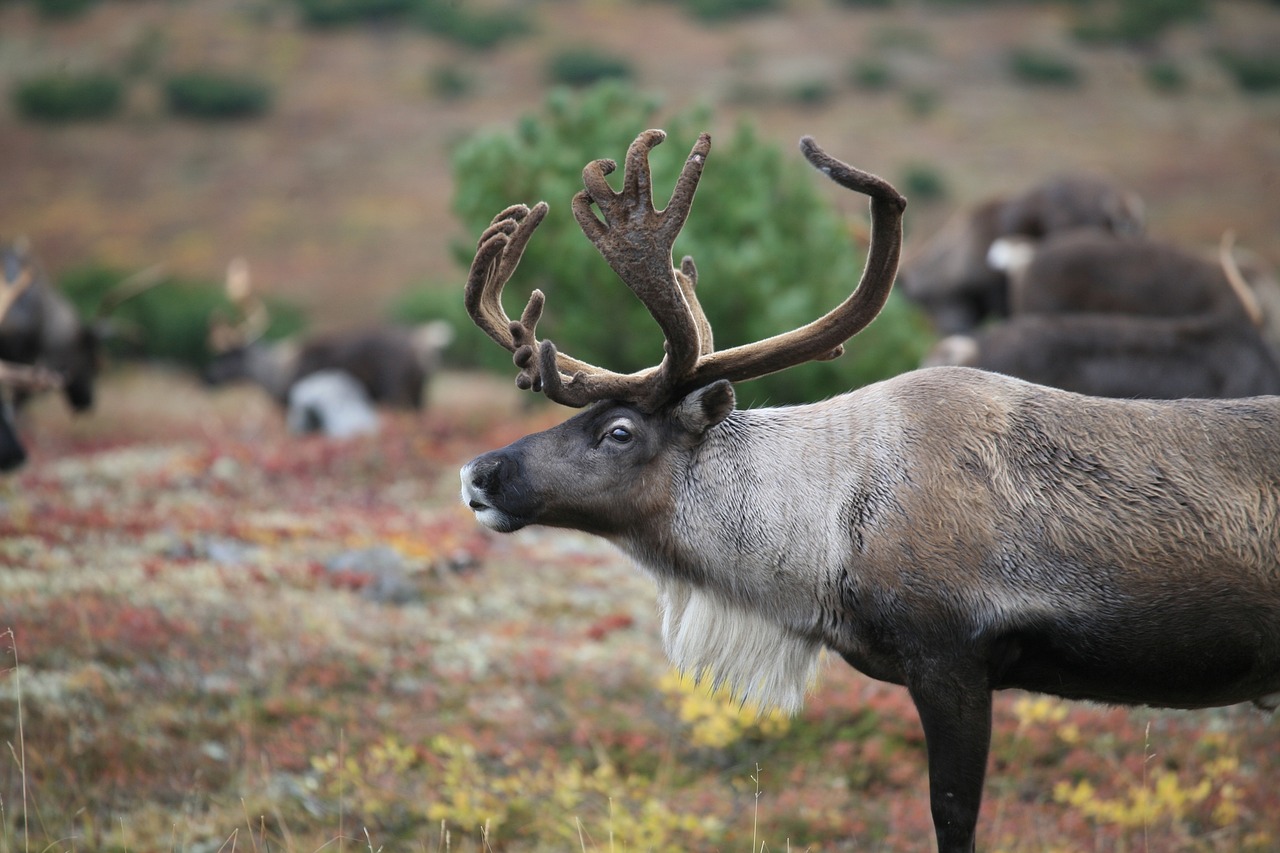 Reindeer are incredibly hardy creatures – they survived the last Ice Age and today live in some of the world’s most inhospitable landscapes. Despite their fine-tuned adaptations to life in the Arctic and after over 600,000 years of living there, reindeer are struggling to survive the rapid changes happening all around them.

In the winter of 2013-14, 61,000 reindeer starved to death in the Yamal peninsula of Russia. The population crashed, devastating the Yamal Nenets – an indigenous people who herd the reindeer for food. A more recent census found that 200 reindeer in Svalbard, Norway didn’t survive the winter of 2018-19.

These mass starvations were largely due to climate change, which is causing unusual spikes of warm winter weather in the Arctic. The higher winter temperatures cause snow to melt and refreeze, or to fall as rain which also refreezes. The icy sheet encases lichen on the ground – the reindeers’ main winter food supply. The reindeer can’t dig through it and often the ice freezes over such a large area that they starve while wandering, trying to reach the plants they can smell beneath them.

Read more: The Arctic is turning brown because of weird weather – and it could accelerate climate change

These “freeze-thaw” and rain-on-snow events do happen naturally each year in the Arctic, and have done for a long time. But they’re happening more often now and on a larger scale.

Change and conflict in the Arctic

The recent struggles of reindeer aren’t all down to climate change though, especially in northern Europe. Sapmi – a region spanning northern Sweden, Norway, Finland and east Russia – is home to the indigenous Saami, who are also reindeer herders. For many years they’ve tried to maintain the tradition which provides them with food and warm clothing, while locked in conflict with industries and governments over land.

Sweden provides 90% of the EU’s iron ore and the mines built to extract this, as well as the areas flooded to store mining waste, reduce the pasture land that’s available for reindeer. One dam holding mining waste in Kiruna, Sweden is 4km long.

The region’s timber industry is also disrupting the ancient forests reindeer have evolved alongside. These are populated by a variety of tree species of various different ages and heights. This creates a canopy that’s uneven, allowing snow to accumulate in deeper and shallower patches below – so some areas will remain grazeable when others are too deeply covered.

Plantations created and used by commercial foresters are monocultures – the trees are all roughly the same age and size. This creates a uniform canopy which allows snow to pool at roughly the same depth everywhere, leaving fewer alternative places to graze when food becomes inaccessible.

Even if there is food and a variety of pastures, the reindeer can be scared away by noisy machinery and roads to the mining and logging sites. One study in Norway found that in the last century, undisturbed reindeer habitat has shrank by 70%, including grazing lands that have been flooded for hydroelectric dams.

Reindeer have less and less to eat and their migration routes are being broken apart by roads, fences and railway lines. The effects of climate change on top of all this make an already difficult situation worse. Many reindeer herders now need to purchase feed for their reindeer during winter – an extra cost that may be difficult for owners of smaller herds to afford.

Losing reindeer isn’t just a worry for herders. These animals play an important role within Arctic ecosystems and can even affect the regulation of the planet’s temperature. Though the effects of reindeer grazing vary from place to place, experiments have shown what can happen when they’re removed from an area. Without reindeer, the diversity of plant species dropped in one study as fast growing grasses that reindeer had previously kept in check were allowed to proliferate and push out other species, like mosses and liverworts.

In some areas, lowland shrubs and flowering plants which were previously eaten by reindeer as seedlings were able to expand into the tundra. An open tundra with few large plants allows more snow to accumulate on the ground. This vast, white landscape reflects more of the sun’s rays back into space and reduces how much the world warms, a phenomenon known as the albedo effect. Shrubby heathlands don’t allow such an even blanket of snow to form and so reflect less solar energy, amplifying the warming of the atmosphere.

Luckily, all may not be lost for the reindeer. In recent years there has been growing recognition of the indigenous land rights of the Saami. They won a court case against the Swedish state which gave them stronger rights in determining who could hunt and fish on their lands. It’s hoped that this could set a precedent for them having more say in how industries use their lands in future.

An official report recently advised against building a train line in Finland, as it would cut through six different reindeer herding areas, and the project has been put on hold. This is a positive step which could open more opportunities for constructive dialogue between these groups in future. Perhaps with growing awareness, more support can be given to protecting reindeer and the wild, diverse landscapes they not only rely on to survive, but also help to create and thrive.