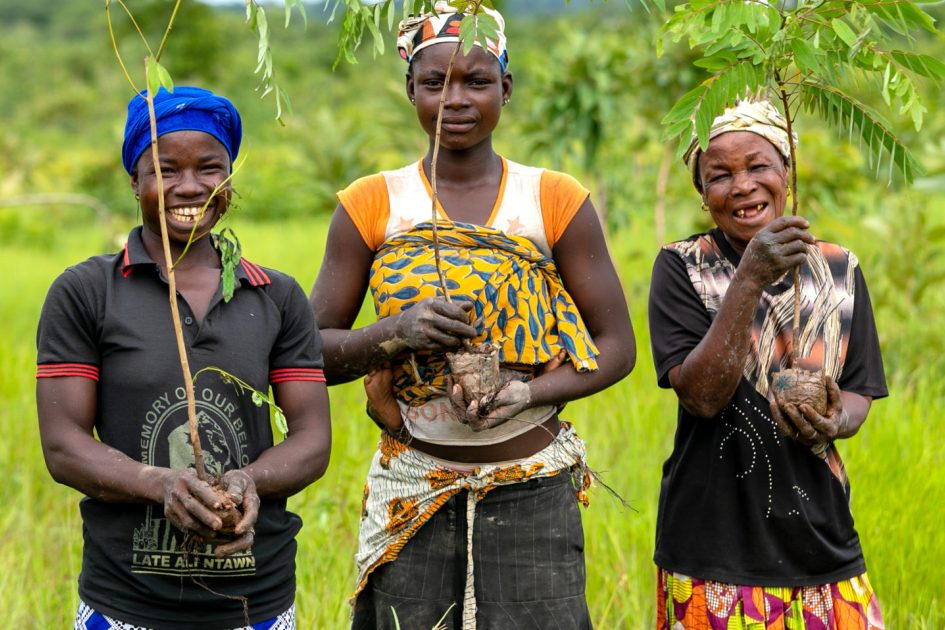 Makada, a farmer and mother-of-three in Ghana’s arid north, tends her collection of shea, cashew and mango trees with a firm eye on the future. She sells the produce to buy her children’s clothes and pay their school fees. “But the benefits I get from the trees are much more than harvesting fruits and shea nuts,” she says. “These trees that we are planting along the river will also help us bring water back.”

The Daka River winds across the dry northeast of the country, and the region’s people – and wildlife – depend on it to survive. But deforestation has taken its toll on the river and reduced its holding capacity, which means it floods more easily and runs dry often.

Climate change is also making agricultural livelihoods in the area more uncertain, says Jonathan Naaba of Tree Aid, a U.K.-based NGO focused on restoration and development across Africa’s drylands. “It’s impacting so much on the lives of the rural poor,” he says. “They need to plan their planting around the rainfall, but the rainfall pattern is erratic, and there are many more droughts and floods than before.”

That’s one reason why Tree Aid has been working since 2018 in the Daka River region, helping communities protect existing trees, plant new ones and allow for natural regeneration. The trees, it has been seen time and again, buffer the uncertainties the farmers face. Since the project began, Tree Aid has worked with locals to plant over a million trees – and regenerate even more – along a 72-kilometer stretch of the river. They also help with forest governance, capacity building and market development, to ensure that the restoration benefits people every step of the way. The project is funded chiefly by Ecosia, a free-to-use search engine that uses is advertising revenue to plant trees.

Naaba says one way Tree Aid has made particular impact is by helping community members form cooperatives to sell forest products such as shea butter and providing them with warehouses in which to store their products. “In the past, when people produced butter, they would sell it immediately,” says Naaba, “and that results in gluts, and the price reduces drastically. But now they can keep a steady price whenever they sell.” They’ve also helped people – and women in particular – access markets directly, circumventing costly middle men.

So far, the primary concern for the Daka River project is wildfires, says Naaba, which can start when people burn land to clear it for agriculture, and the fire gets out of control. While fire has long been a traditional method for preparing land for planting in Ghana, like elsewhere where in the world, drier conditions due to development’s toll on ecosystems in conjunction with global warming now often makes the practice perilous if it is not approached with certain new precautions.

Read More : Why trees could bring water back to the Sahel

It’s extremely frustrating, Naaba says, because “you can do the best work, and then the fires will come and consume almost everything.” That’s why one arm of the project focuses on educating locals about the importance of controlling fires, and equipping them with the skills they need to do so effectively.

Land access is a challenge for many people in the area – particularly women, as land is mostly controlled by chiefs and male heads of families. Without secure land tenure, many women are reluctant to invest in planting trees that take many years to grow before they’re ready to harvest and turn profits. “So that’s something we are really working on in terms of how we can empower the disadvantaged people so they can have access to land for a period of years and reap the benefits, and in that way they can put energy into their plots,” says Naaba.

For Makada, that sense of long-term ownership is crucial: “I’d like to believe that by the time I grow old, my children and I will still benefit from the trees that I am planting now,” she says. Investing in restoration is a no-brainer to her, and she’d like to see more people join the journey:  “I want the whole world to know how important trees are.”