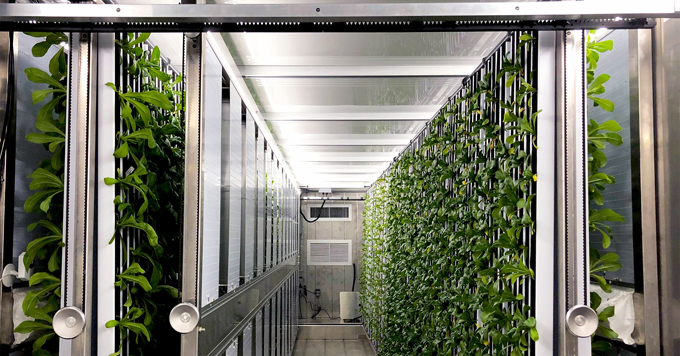 Instead of trucking vegetables across the country, one company wants to help food service providers grow food right where they are, no matter how little experience or land they have.

“It’s a 320-square-foot shipping container like you would see on a boat, a train, a truck, outfitted with an automated growing system,” he says, “to grow about 3.5 acres worth of produce with no pesticides, no herbicides, and about 98.5% less water.”

Inside the Greenery, plants grow vertically, with their roots in a nutrient solution instead of soil. Sensors, pumps, and LED lights automatically maintain ideal growing conditions, so you don’t have to be an expert to start farming.

“You plug it in and you’re growing same day,” McNamara says.

As the climate changes and the world’s population grows, McNamara says it makes sense to farm in a way that produces more food with fewer resources and less transportation.

“Instead of making more bigger farms,” he says, “we make hundreds, then thousands, then millions of people into independent successful farmers where they live and work.”