The United Nations Environment Programme (UNEP) and adidas Runtastic have unveiled a new challenge to raise awareness of biodiversity loss and rally support for conservation.

UNEP and digital health and fitness giant adidas Runtastic have teamed up again with the Internet of Elephants for another rendition of the Run Wild challenge. For this year’s challenge, the group has also partnered with Space For Giants, the Pangolin Project, and the Bhutan Tiger Center.

The first challenge took place last year and highlighted the need to conserve endangered wildlife in honor of International Snow Leopard Day. Through the support of the Snow Leopard Trust and the Internet of Elephants, Run Wild enabled users to compete with Uuliin, a wild snow leopard in Mongolia. More than 500,000 participants attempted to outrun Uuliin during the 12-day challenge.

This year, the initiative aims to double the number of participants to one million, representing the one million animal and plant species threatened with extinction.

“Biodiversity is disappearing from our planet at an unprecedented pace. There is simply no time left – ​we need to act. We can’t just walk, we need to run to stop this,” said Inger Andersen, UNEP Executive Director. “RunWild has combined digital technology, sports, health and emotions to push us out of our comfort zones and make us race against endangered species – to save them. We encourage runners around the world to take up this challenge, for their own health and the health of our planet.”

Runners will have the opportunity to race against Pamoja, a pangolin in Kenya; Adjany, an elephant migrating between Angola, Zambia, Botswana, and Namibia; and Tendrel Zangmo, a female tiger in Bhutan.

Tiger populations hit a historic low in 2010. Although, recent research has shown that tiger populations have been on the rise across six countries, offering new hope for the iconic species. However, tigers still face a variety of threats, including poaching, wildlife trafficking, and habitat destruction. It is imperative to expand protected areas, strengthen legislation and enforcement, and adopt innovative conservation tools.

“Tigers are not only revered in Bhutan as one of the mythical animals and protectors, but as top predators they have a crucial role to play in keeping their habitat healthy by stabilizing the populations of quick breeding grazing animals such as wild pig and deer,” said Tshering Tempa, Leading Tiger Biologist at the Bhutan Tiger Center. “Poaching, habitat loss, and prey depletion continues to threaten tigers in the wild today. My hope for the [Run Wild] campaign is to create awareness of the plight of tigers in the wild and help to conserve this magnificent creature.” 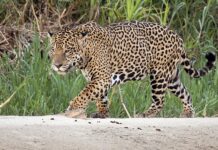