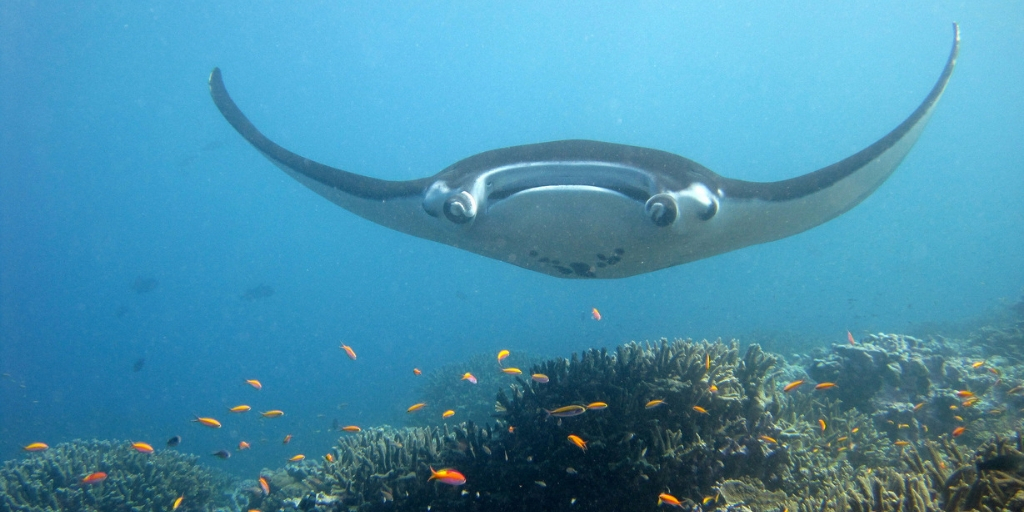 An elusive ocean wanderer, the giant oceanic manta ray glides effortlessly through its alluring undersea habitat of living coral reefs, sea turtles and aquatic wildlife. These gentle giants can weigh over 5000 pounds, grow up to 23 feet in length, have a massive wingspan of up to 29 feet and can dive 1,000 meters!  They can live 40-50 years, are friendly, exceptionally smart and curious, can recognize people and have complex social behavior.

Once feared as dangerous man-eating sea creatures capable of sinking ships, this grand aquatic nomad is now prized for its gill plates. They have become some of the most threatened fish in our seas.

According to the United Nations Environment Programme, as much as 40% of the ocean is suffering from the overexploitation of marine species, loss of coastal habitats such as blue forests and climate change.

Overfishing is one of the biggest threats to ocean health. WWF reports that 90% of the world’s fish stocks are either fully fished or overfished.

A 2014 IUCN report states that 25% of the worlds sharks and rays face extinction.

“Unless we do something about it, there’s a high likelihood their declining trajectory will eventually lead to their extinction,” said Dr. Nick Dulvy, Co-Chair of the IUCN Shark Specialist Group.

Manta Rays are imperiled globally by targeted fisheries and bycatch. The IUCN Red List reports that over the last 75 years, regional populations have been reduced by 80%.

They are classified as vulnerable with population decreasing and were listed as threatened under the US. Endangered Species Act in January of 2018.

The reduction in the population of giant manta rays correlates largely to the increased demand from consumers for Peng Yu Sai, or “Fish Gill of Mobulid Ray,” in the Asian market as an alternative to shark fin soup. This poses a real threat due to their low productivity rates.

Raising consumer awareness of the threats posed by illegal wildlife trafficking of gill plates will reduce their demand and consumption and help to eliminate overexploitation of the species.

According to WildAid, an NGO that fights against wildlife trafficking, the manta ray gill plate market amounts to $30 million per year with 99% imported by the Chinese province: Guangzhou.

Between 2010 and 2013 the number of rays killed annually was up to 150,000 and WildAid launched an extensive campaign to highlight the beauty of manta rays and to alert consumers to the potential health risk associated with consuming their gill plates.

In a 2011 report Ray of Hope, WildAid revealed that giant rays are worth more alive than dead as each manta generates as much as $1 million in revenue for the tourism economy.

Conservation efforts are working, in 2016 a WildAid followed up with participants and found that 97% are willing to stop purchasing and consuming manta ray gill plates.

Caught between commerce and conservation, this is a species that is overfished, under protected and understudied.

With a goal of a sustainable future for the oceans, manta rays and their ecosystems, the Manta Trust is a UK-based charity formed in 2011. They co-ordinate global research and conservation efforts for the giant oceanic manta ray and recognize it as an important indicator species.

Dr. Guy Stevens CEO and Co-founder that manta rays are indicators of the health of the reef ecosystem. “I consider them [manta rays] to be the canary in the coal mine,” he explained.

“The juvenile life stage for oceanic mantas has been a bit of a black box for us since we’re rarely able to observe them,” said Dr. Joshua Stewart, who serves as the Executive Director of the Manta Trust. “Identifying this as a nursery highlights its importance for conservation and management, but it also gives us the opportunity to focus on the juveniles and learn about them.”

In recent years, protecting ocean species has been a top priority. Aligning with goal 14 of the UN Sustainable Development Goals, the 2019 theme for World Wildlife Day was “Life below water: for people and planet”.

The United Nations Sustainable Development Goal 14: Conserve and sustainably use the oceans, seas and marine resources for sustainable development.

Some of the targets for SDG 14 are:

More protections are needed but meeting these goals along with education and awareness about this magnificent species will make it easier to protect them. 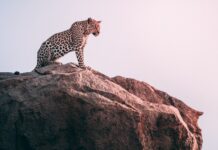 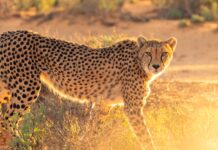