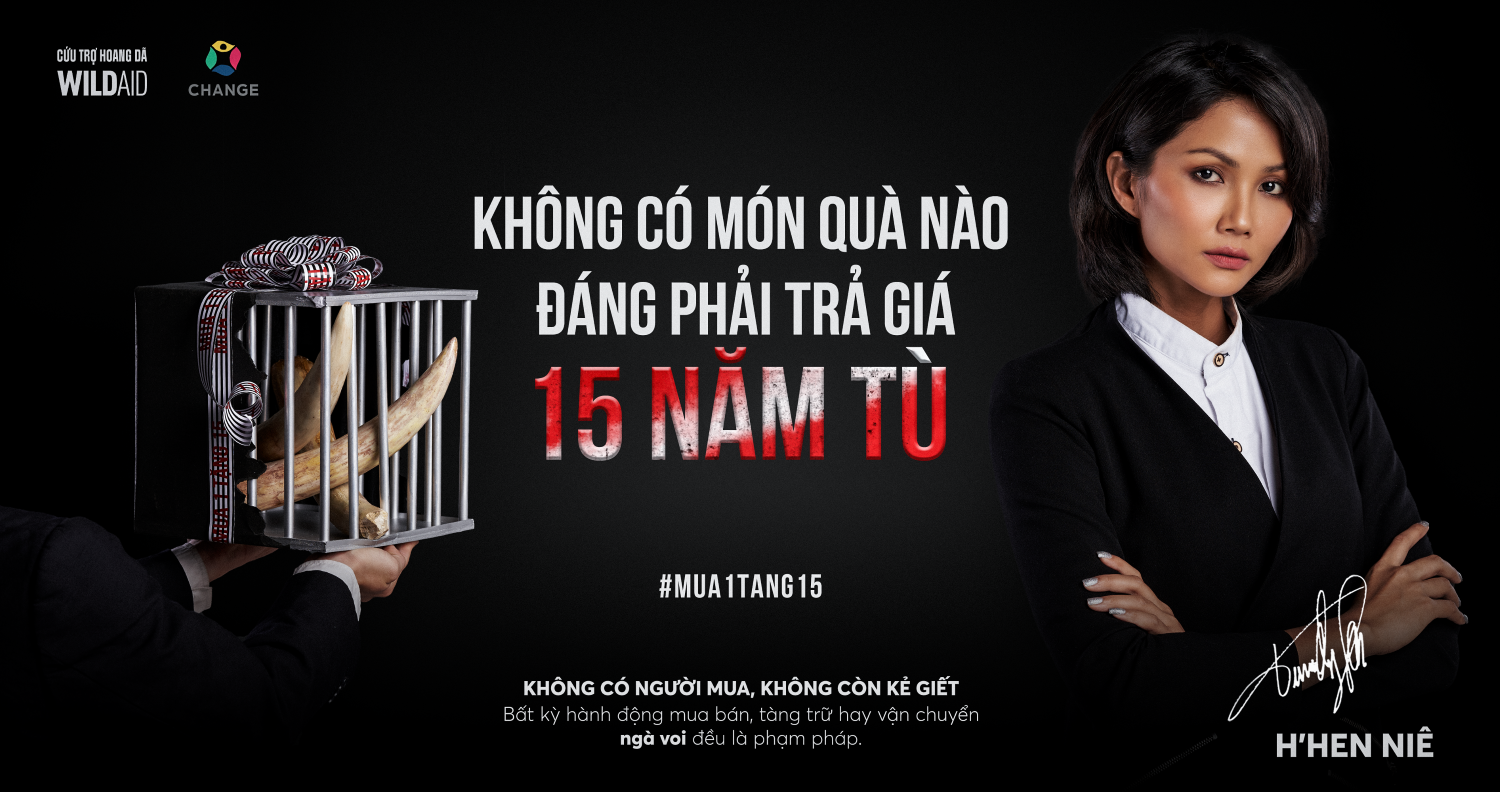 WildAid and CHANGE are raising awareness of strict penalties for wildlife gifts in Vietnam with a new campaign. Disguised as the deal of a lifetime, the “Buy 1, Get 15” campaign highlights Vietnam’s increased wildlife crime penalties.

Revised penalties came into effect in January 2018 through amendments to Vietnam’s penal code. According to WildAid, the code covers a variety of crimes, including trafficking in wildlife products from rhinos, elephants, pangolins, tigers, and other animals. The code not only applies to the killing of these animals but also transporting, trading, storing, and selling endangered species products.

Those convicted of breaking the newly revised law face up to fifteen years in prison and fines up to $660,000. In November 2019, a man was sentenced to thirteen years in prison for illegally harvesting 145 pangolins, 7kg of pangolin scales, and more than 70kg of elephant skin. His accomplices received varying sentences from five to eight years in prison.

Pangolins are the most trafficked mammal in the world. Pangolin meat is considered a delicacy in some countries, and their scales are used in traditional Asian medicine. The International Union for Conservation of Nature (IUCN) changed the status of three species of pangolin in December. The white-bellied and the giant ground pangolin, moved from the “Vulnerable” to “Endangered” category, while the Philippine pangolin is now listed as “Critically Endangered.”

“Sending a gift for Tet is a beautiful Vietnamese tradition,” says Nguyen Thanh Ngoc Han, Wildlife Project Leader at CHANGE. “However, the occasion has been used to give illegal gifts of rhino horn, elephant ivory and pangolin scales, which originate from false beliefs about medicinal and spiritual benefits. We hope to remind shoppers that if you do the crime, you’ll do the time.”

“I didn’t know that buying one illegal wildlife product could send people to prison for up to 15 years,” said a participant. “The exhibit should be showcased in more places so that the public knows these wild animals are on the verge of extinction and it’s illegal to consume them. We should protect these wild animals.”

The campaign has generated a lot of media attention.

“Forty-three newspapers covered the launch of the event, including Vietnam’s two major newspapers Thanh Nien and Tuoi Tre. Online, the PSAs and organic posts reached more than 1 million people while 70,000 directly engaged with the content. Roughly 90% of those people expressed that they didn’t know purchasing these wildlife products was illegal,” stated WildAid.

This isn’t the first time WildAid and CHANGE have attempted to spotlight wildlife crime ahead of the Lunar New Year. In 2019, the duo teamed up with several prominent Buddhist temples to urge Vietnamese citizens to aid in the protection of pangolins, elephants, and rhinos. The “Be Their Bodhisattva” campaign featured statues of the three species kneeling in prayer to Buddha at various pagodas in Vietnam.

Vietnamese customs made headlines for the world’s largest ivory seizure last year. Authorities seized nine tonnes of ivory. The seized ivory represented more than 1,000 deceased elephants. Since 2004, Vietnam has seized around seventy tonnes of ivory, the equivalent of 10,000 elephants.

The ivory trade has been a prominent threat to African elephants with approximately one killed every fifteen minutes. For the global elephant population, poaching rates have continued to exceed the elephant population growth rate. Elephant numbers overall will continue to decline unless there is accelerated action from governments.

Rhino and elephant populations are on the rise in Tanzania. The population rebound is a result of government efforts to crackdown on poaching and wildlife trafficking. Tanzanian President John Magufuli has led efforts to dismantle organized criminal networks and poaching since his election in 2015.

“Wildlife need our help,” said Miss Universe Vietnam H’Hen Niê. “I became extremely disheartened when I learned that elephants and other wild animals, such as rhinos and pangolins, are on the verge of extinction because of misguided notions about health benefits or representations of status. All Vietnamese citizens should actively participate in this campaign and please never purchase or accept gifts made from endangered or threatened animals.”