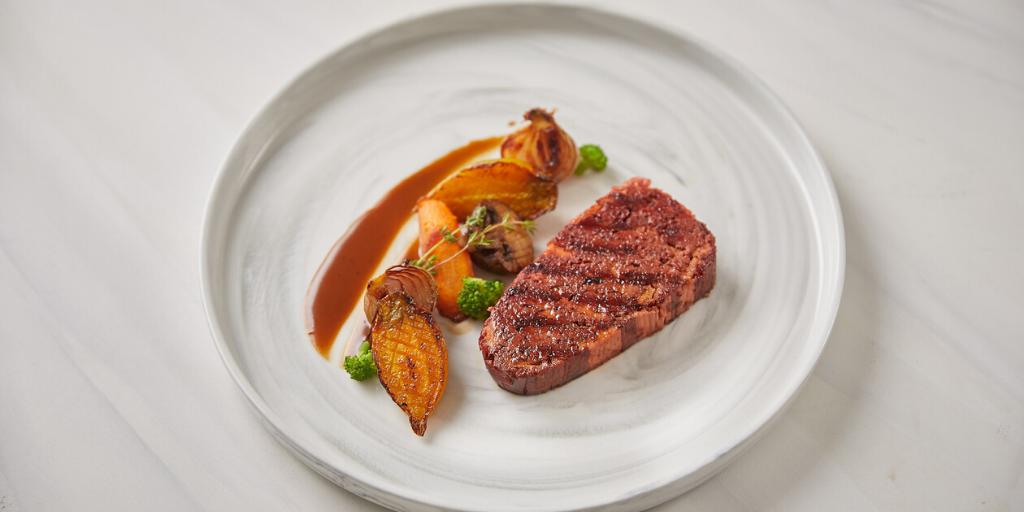 An Israel-based startup is shaking up the plant-based protein industry. Redefine Meat has unveiled a new plant-based alternative to steak- the Alt-Steak. The company utilizes 3D printing technology to mimic the texture, flavor, and appearance of beef steak.

To create the Alt-Steak, Redefine Meat teamed up with butchers, chefs, food technologists, and flavor manufacturer, Givaudan, to map sensorial parameters such as fat distribution, juiciness, texture, and mouthfeel. To replicate beef steak, the vegan steak is printed layer by layer using the company’s “Alt-Muscle, Alt-Fat, and Alt-Blood plant-based formulations.”

“The importance of using precision 3D printing technology to achieve texture, color and flavor—and the combinations between them—cannot be overstated. By using separate formulations for muscle, fat and blood, we can focus on each individual aspect of creating the perfect Alt-Steak product,” said Eshchar Ben-Shitrit, CEO and Co-Founder of Redefine Meat. “This is unique to our 3D printing technology and lets us achieve unprecedented control of what happens inside the matrix of alt-meat. Collaborating with an industry-leader like Givaudan has led to the creation of an Alt-Steak product that is not only healthy and sustainable, but also offers the satisfying flavors, textures and aromas of eating actual meat.”

From veggie burgers to vegan tuna, plant-based proteins have seen a surge in popularity in recent years. The market for meat substitutes was estimated to be $4.63 billion in 2018. Experts forecast that the market will grow by 28 percent annually, reaching $85 billion by 2030.

“Since day one of the company, we have been working on creating a tasty and affordable plant-based alternative to steaks, one of the most cherished food products and the driver of the entire meat industry,” said Ben-Shitrit. “To enable mass adoption, we knew that creating an alternative meat product that was both high in quality and nutritional composition would require new technologies and production processes never seen before in the food industry.”

Ben-Shitrit added that the announcement “marks the start of a new era in alternative meat – the Alt-Steak era – driven by production processes that will accelerate the development of a wide range of alt-meat whole muscle products and create a sustainable alternative to raising and eating animals.”

Billions of animals are slaughtered each year for human consumption. Globally, meat production has quadrupled since the 1960s.

This increase has been detrimental to the planet. Animal agriculture is a leading cause of the climate crisis. The industry emits approximately 7.1 gigatonnes of carbon dioxide each year, with beef and cattle milk production accounting for most emissions.

The overall process is also resource-intensive. To produce merely 1kg of beef, it takes 25kg of grain and approximately 15,000 liters of water. Redefine Meat has stated that its products are dramatically more sustainable and cost-efficient than factory farming and meat processing- boasting a 95 percent smaller environmental impact.

The company will test its Alt-Steak products at select high-end restaurants later this year. Following market testing, Redefine Meat will accelerate the production of its revolutionary 3D meat printers and alt-meat formulations for large-scale market distribution in 2021.