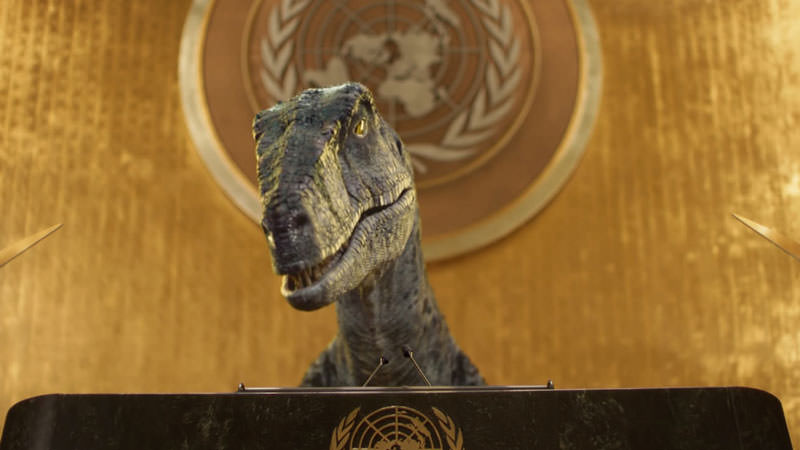 The UN General Assembly Hall in New York has been taken over by a dinosaur with a message for world leaders: stop making excuses.

Known as Frankie, the dinosaur is part of a newly launched campaign, ‘Don’t Choose Extinction,’ by the UN Development Programme (UNDP). The short film featuring Frankie serves as the campaign’s centerpiece.

“You’re headed for a climate disaster, and yet every year governments spend hundreds of billions of public funds on fossil fuel subsidies,” explains Frankie. “Imagine if we had spent hundreds of billions per year subsidizing giant meteors. That’s what you’re doing right now!”

Globally, more than $11 million is spent every minute in subsidies for the coal, oil, and gas industries. Overall, roughly $423 billion are spent each year to subsidize fossil fuel consumption.

Most notably, G20 nations, representing 78 percent of global emissions, have been a boon for the fossil fuel industry. The largest historical contributors to climate change, G20 nations have provided more than $3.3 trillion in fossil fuel subsidies from 2015 to 2019.

In the campaign video, Frankie urges world leaders not to choose extinction and start making changes, highlighting how the vast amount spent on fossil fuel subsidies could be better spent helping people living in poverty.

“Don’t you think that helping them would make more sense than… I don’t know… paying for the demise of your entire species?” asked the dinosaur.

The total amount spent on fossil fuel subsidies could eradicate global energy poverty four times over, provide three times the annual amount needed to eliminate global extreme poverty, or cover the cost of COVID-19 vaccinations for every person on the planet, according to the UNDP.

The talking dinosaur highlighted the immense opportunity governments have to rebuild their economies following the COVID-19 pandemic.

“Don’t choose extinction. Save your species before it’s too late. It’s time for you humans to stop making excuses and start making changes,” the dinosaur added.

UNDP’s ‘Don’t Choose Extinction’ campaign has launched days before the COP26 climate conference in Glasgow. The campaign aims to bring attention to the need for fossil fuel subsidy reform and encourage action ahead of the international climate summit.

The UN agency has stressed that time is running out and that addressing fossil fuel subsidies fairly and equitably is essential moving forward.

“When we consider how we are going to pay for the fight against climate change, fossil fuel subsidies mean that we are effectively starting at a point of minus US 423 billion dollars,” said Achim Steiner, UNDP Administrator. “Reform is not easy and the transition to clean energy presents a range of difficult challenges in many countries. Indeed, each country needs to take their own path. But we also know that we must move away from these energy sources that are contributing to our planet’s decline. Ending financial support for them in a way that is fair and equitable is a critical element of that transition.”

“The recent IPCC report, which the UN Secretary-General described as a ‘code red’ for humanity, shows that only the most ambitious climate action will limit global warming to 1.5 degree Celsius. This is what science dictates is needed to avoid a climate catastrophe,” added Steiner.