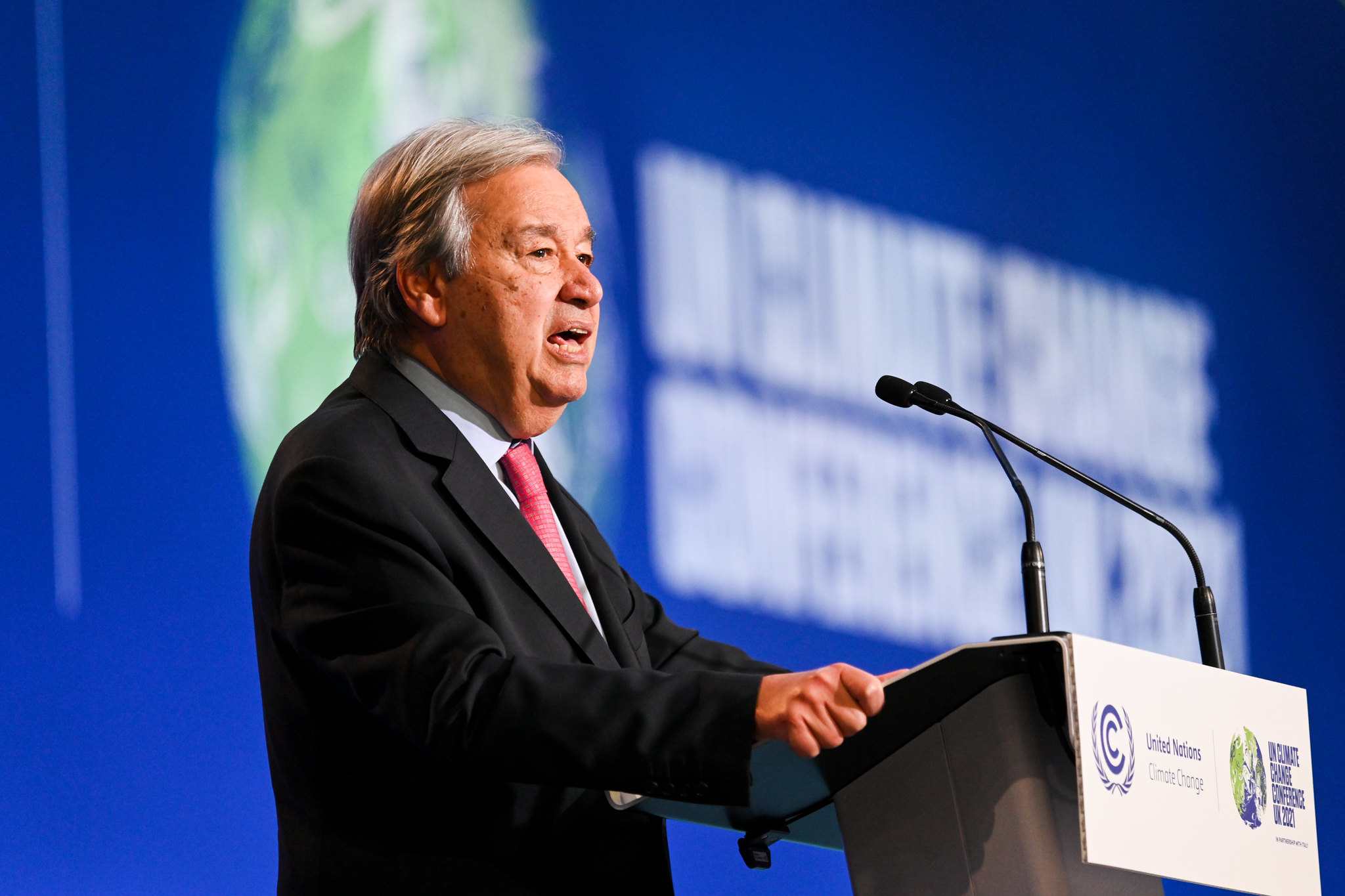 As COP26 revs up, UN Secretary-General António Guterres had a strong message for world leaders: humanity is digging our own grave.

On the second day of COP26, the UN Secretary-General gave a stark address to world leaders, emphasizing the need for urgent and transformative action.

“The six years since the Paris Climate Agreement have been the six hottest years on record. Our addiction to fossil fuels is pushing humanity to the brink,” said Guterres. “We face a stark choice: either we stop it- or it stops us.”

Recent reports have shown that humanity has caused unprecedented warming and irreversibly altered the planet. Temperatures have already risen 1.2°C. Out of this rise, human activities have been responsible for roughly 1.1°C of warming since 1850-1900.

Despite the irrefutable evidence of the climate crisis, governments have been hesitant to sever ties with the fossil fuel industry, instead opting to contribute a substantial amount of financial support. A recent analysis from the International Monetary Fund found that more than $11 million is spent every minute of every day in subsidies for the coal, oil, and gas industries.

Since the start of COP26, the fossil fuel industry has benefited from more than $27 billion and counting in subsidies.

“It’s time to say: enough. Enough of brutalizing biodiversity. Enough of killing ourselves with carbon. Enough of treating nature like a toilet. Enough of burning and drilling and mining our way deeper,” urged the Secretary-General. “We are digging our own graves.”

During his address, Guterres warned that the recent climate action announcements may give off the false impression that the world is on track to “turn things around.”

“We face a moment of truth. We are fast approaching tipping points that will trigger escalating feedback loops of global heating,” added the UN Chief. “But investing in the net-zero, climate-resilient economy will create feedback loops of its own- virtuous circles of sustainable growth, jobs, and opportunity.”

The key message of Guterres’ address was clear- it is imperative that world leaders join together to keep the Paris Agreement target of 1.5°C alive through increased ambition on climate mitigation and concrete action to cut global emissions by 45 percent by 2030.

However, for this to happen, G20 nations must lead the charge by ramping up their climate ambition through swift emissions reductions and increasing climate finance commitments.

The G20 are the world’s largest historical contributors to climate change and currently represent nearly 80 percent of global emissions. Furthermore, G20 nations alone have provided more than $3.3 trillion in fossil fuel subsidies from 2015 to 2019.

Guterres urged developed countries and emerging economies to join together and build coalitions in an effort to create the necessary financial and technological conditions to accelerate decarbonization of the economy and the phase-out of coal power. Guterres noted that these coalitions would aid large emitters facing difficulties in the energy transition by providing needed support to help them shift from “grey to green.”

Guterres stressed that governments must make the annual $100 billion climate finance commitment for developing countries a reality and that multilateral development banks must work to mobilize greater investments, highlighting the urgent need for funding for those suffering the most from climate change, Least Developed Countries (LDCs) and Small Island Developing States (SIDS).

“The sirens are sounding. Our planet is talking to us and telling us something, and so are people everywhere. Climate action tops the list of people’s concerns across countries, age, and gender. We must listen, we must act, and we must choose wisely. On behalf of this and future generations, I urge you: choose ambition, choose solidarity, and choose to safeguard our future and save humanity,” Guterres concluded.